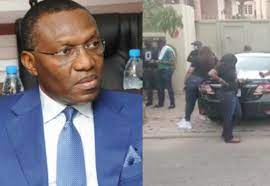 Some workers of Heritage Bank Plc on Monday besieged the residence of Andy Uba, former senator from Anambra state, over a loan they said he owes the financial institution.

The staff of the bank, who were seen with placards, gathered in front of his residence in Abuja, asking the politician to pay the purported loan to save their jobs.

TheCable could not immediately verify details of the debt which Osita Nwasinobi, a spokesperson of the Central Bank of Nigeria (CBN)), said he was not aware of when contacted.

Both Uba and the Asset Management Corporation of Nigeria (AMCON) have been contacted for comments regarding the development.

One of the bankers at the scene said they were appealing to the former senator to “kindly pay this money so that these people will not lose their job.”

“Senator Andy Uba has been owing the bank for a couple of years now, and we are here for a very peaceful meeting with him to ask him to repay those loans because those are depositors funds,” the unidentified staff said in a recorded video from the scene.

“And those monies, if not repaid, will throw the number of people you see here with their families out of work. And you know the situation of the economy now.”

Some financial institutions in Nigeria, like Heritage Bank, are known to experience difficulty in recovering loans to businesses and private individuals.

In 2020, the CBN took a step ahead of the defaulters by allowing banks to seize funds in the accounts of loan defaulters to protect depositors.

Also, the senate recently passed a bill that strengthened the power of AMCON to recover bad loans by allowing it to seize and sell properties traced to debtors, whether or not such assets are used as security/collateral for obtaining the loan in question.