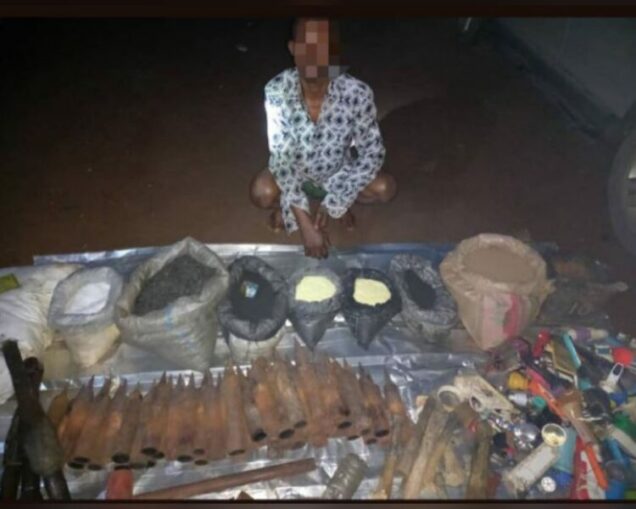 Simeon Onigbo, the man alleged to be manufacturing bombs for The Indigenous People of Biafra, has been arrested in Imo State.

Abbatam said the Onigbo had confessed to the crime and promised to reveal the hideouts of the terror group.

According to Abbatam, Onigbo used to produce locally-made bombs used in attacking police divisions and other government facilities in Imo.

The spokesman said on April 20, the command received credible intelligence on the hideout where some alleged ESN members were manufacturing Improvised Explosive Devices (IEDs) used in attacking police stations and government facilities in the state.

He said that the police operatives immediately mobilized to the hideout, located at Uba Umuaka in Njaba LGA of Imo, and raided the camp.

“In the course of the raid, one Simeon Onigbo, aged 50, was arrested. The suspect admitted to being the manufacturer of most of the ( IEDs) used in attacking police stations in and outside the state.

“On searching the hideout, items recovered include one IED, 58 pieces of Cannon Steel Pipe, two Chisels, one Monday Hammer, one bag of Potassium Nitrate, and substances suspected to be sulfur weighing 30 pounds.

Abbatam said that the Command’s Explosive Ordnance Disposal Unit (EOD) had taken over the recovered bomb for technical analysis and detonation.

He said that investigation was ongoing, adding that the suspect had made a useful statement and also mentioned members of his gangs outside the state who patronise him.