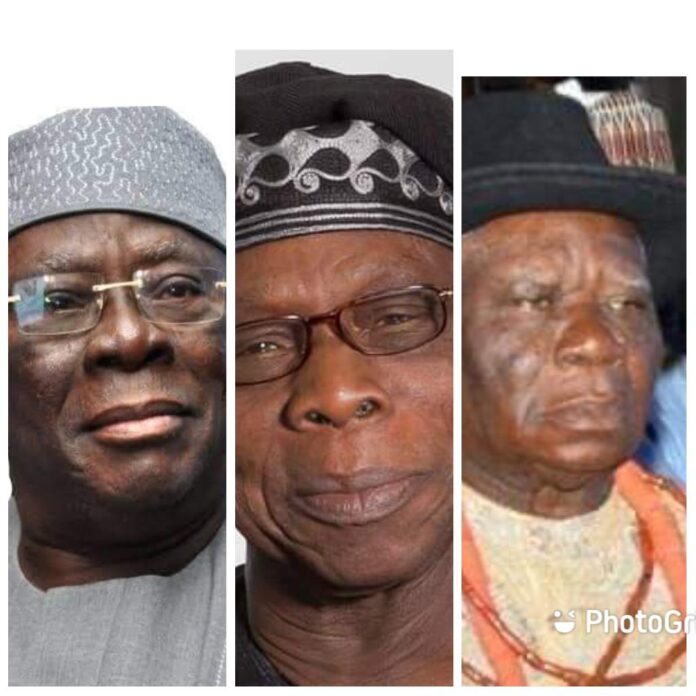 The 93-year-old Afenifere leader also unequivocally backed 94-year-old leader of the Pan Niger Delta Forum and Chairman of the Board of Trustees, Ijaw National Congress, Chief Edwin Clark, that people  oil produced in the Niger Delta states belonged to the people of the region and not to the people of Nigeria.

He went on a trip down memory lane and gave a perspective on constitutional evolution in Nigeria, insisting that the current 1999 Constitution must be changed to reflect fiscal federalism, regional autonomy and resource control.

The nonagenarian said, “Before the issue degenerates therefore into disputation between two respectable elder statesmen (Obasanjo and Clark), I owe a duty to our founding fathers to throw some light on the historical constitutional evolution of the country to help us move Nigeria forward.

“Our colonial masters brought the various ethnic nationalities together through various constitutional reforms under a unitary form of government from 1914 to 1950 under Macpherson Constitution when Nigeria was divided into three regions namely Northern Region, Western Region and Eastern Region.

“The Macpherson Constitution which was supposed to last five years under a unitary system collapsed in 1953 following a motion by the late Chief Anthony Enahoro for self-government for Nigeria in 1956. The then Colonial secretary Sir. Oliver Lyttleton later known as Lord Chandos summoned the political leaders, our founding fathers, Dr. Nnamdi Azikiwe, Sir Ahmadu Bello and Chief Obafemi Awolowo to Lancaster House in London.

“It was at this conference that the defects in Macpherson Unitary Constitution were dissected and they settled for a Federal Constitution which became operative in 1954 with the establishment of the three autonomous regions headed by a Premier.

“The provision of this Federal Constitution with some amendments was incorporated in the 1960 and 1963 Independence Constitution. The residual powers in the constitution reserved for the federating autonomous regions. Revenue allocation was agreed to be on derivation which you now refer to as resource control with the payment of 50% (section 140, 1963 Constitution) to the region where the revenue was derived. It was a two tier Federal system with the State government being co-ordinate and not subordinate to the Federal Government.

“This was the peaceful co-existence position of the unity of the ethnic groups until 1966 when the military took over the government and abrogated the constitution agreed to by our founding fathers and set up the present 1999 constitution. The obnoxious provisions of this constitution have been the cause of instability in the country.”

Continuing, Adebanjo added, “When General Obasanjo asserts that the Niger Delta Resources is not owned by Niger Delta but Nigeria, is the General suggesting that God created the resources in Niger Delta when Nigeria came into existence in 1914, or it was there before the amalgamation?

“It is the amalgamation and the decision of our founding fathers to live together under the conditions agreed to in Independence Constitution that make other parts of Nigeria to lay claim to the resources of Niger Delta. The question of the protection of Niger Delta resources against external forces by the Federal government is not a big deal but a responsibility assigned to the Federal Government under the Federal System

“I will therefore passionately appeal to General Obasanjo to join hands with the other patriots to bring pressure to bear on President Muhammad Buhari to ensure the change of the present fraudulent constitution by restructuring the present unitary constitution to the federal system agreed to by our founding fathers before the 2023 elections to enable the nation to move forward peacefully in unity and progress.”