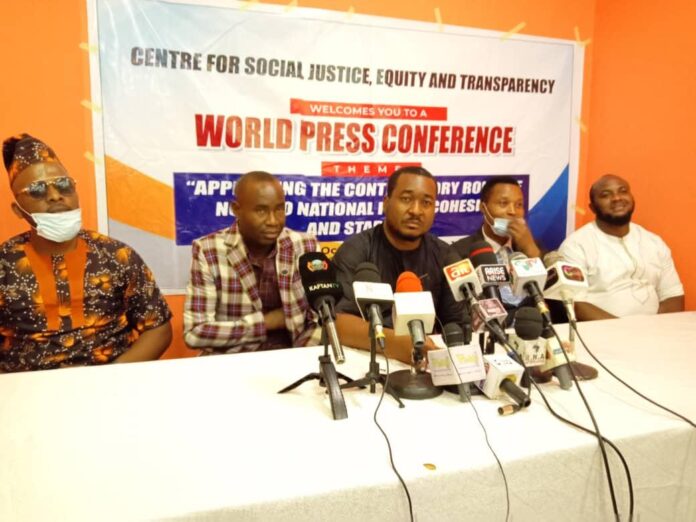 The Centre for Social Justice, Equity and Transparency (CESJET) says the trip by the Secretary to the Government of the Federation, Boss Mustapha, some state governors and deputies as well as traditional rulers to Rome for prayers is timely and necessary.

The Centre, which made this known today during a press conference in Abuja, also said the move could ultimately make the difference in the fight against insecurity as well as the forthcoming general elections.

Speaking to the media and other guests, CESJET’s Executive Secretary, Ikpa Isaac, said by this singular act, the Nigeria Christian Pilgrims Commission (NCPC) has demonstrated special concern for the country.

Ikpa said the Centre is particularly pleased with the Executive Secretary of the Commission, Rev Yakubu Pam for this bold initiative to pray for the nation.

“The Center for Social Justice, Equity and Transparency (CESJET) is however worried that some people, out of mischief, are creating confusion around this issue that Nigerians should be cheering. We have since reviewed the outcry and discovered that it is the doing of the opposition that is bent on politicising every single aspect of national life even when there is no basis for it”, he added.

“As a background, we want Nigerians to note that the country critically needs prayers in view of the reality of our existence. In terms of the security challenges Nigeria faces, all the interventions known to mankind have been applied to address the problem but these have not completely solved the issue. This should tell us that the God factor must be brought in for us to get permanent solutions that will restore peace to the land.

“As for the forthcoming 2023 General Elections, we are all aware that the enemies of Nigeria, within and without, are beating drums of war in anticipation that the polls will become the trigger for a meltdown and eventual disintegration of Nigeria. This is enough reason to approach God in prayers to turn the tide in favour of the country. It is important to pray for the General Elections to become a turning point that would usher the country into greatness.

“Anyone that concludes that prayers in the Holy Land are not needed to seek God’s intervention for these pressing national matters is definitely against the interest of Nigeria and should be feared as an enemy. Only people that want these serious issues from getting the God touch would condemn the steps taken by the Executive Secretary of NCPC in galvanizing leaders to embark on special prayers for the country”.

According to the Centre, the efforts of the NCPC may “have helped the country to overcome bloodshed by evil men, external conspiracies targeted at destabilizing the country and other vices”.

Ikpa added ” NCPC has equally enthroned the highest level of transparency in the face of dwindling revenue across the country, managing its meagre allocation to carry out the much it has achieved. In this wise, we call on the Presidency to accelerate funding for the agency so that it can onboard more well-meaning faithful on its prayer train”.

CESJET, therefore, charged Pam to “lead the NCPC to do more in the area of peace-building and national cohesion while remaining undeterred by those that have decided to deliberately mix up the issue so that they can create crises that provide blood for them to suck.”

The Centre, however, urged the Federal Government to revisit the allocation for the commission, noting that it needs improved funding to achieve more.