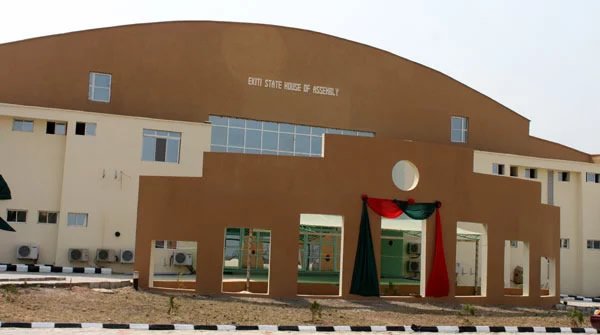 The Ekiti State House of Assembly has reportedly been shut and taken over by operatives of the Nigeria Police.

The decision to shut the assembly was based on a rumoured planned invasion by some unidentified thugs.

Vanguard reported that armed policemen were stationed at strategic locations in the House to forestall the rumoured planned invasion.

According to the newspaper, Staffers of the Assembly were this morning sighted trooping out of their offices to their respective locations.

Some of the workers, who allegedly spoke under condition of anonymity explained that there was an order from the State Police Headquarters that workers should vacate the assembly.

They said they were told that some people were planning to attack the House of Assembly.

However, the newly-elected Speaker of the Assembly, Gboyega Aribisogan, during a telephone chat with newsmen, said there was no crisis in the assembly.

According to him, “the leadership of the police command in Ekiti informed us this morning that they had verifiable intelligence about some hoodlums coming to attack the assembly complex.

“And to avoid a breakdown of law and order, there’s a need for their presence and they have promised to conduct investigation into the matter and report to us before the close of work today.

“I want to encourage my colleagues and staff of the Assembly to be patient and bear with us.

“Normalcy will soon return to the house,” Aribisogan said.

Aribisogan was elected as the new Speaker of the assembly yesterday after defeating Mrs Olubunmi Adelugba from Emure Ekiti.