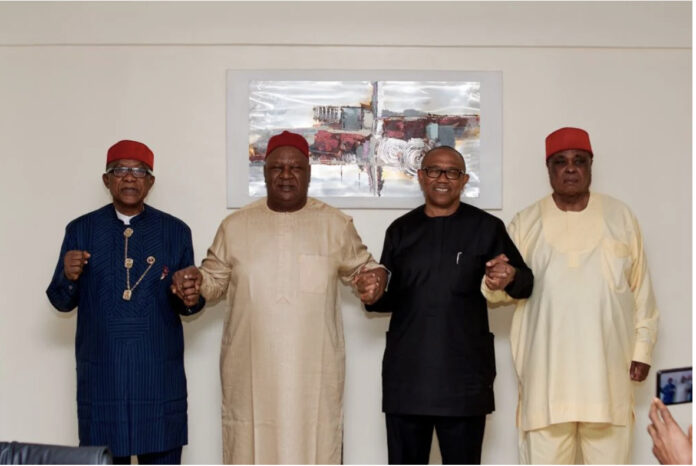 The crisis over the zoning of the presidential ticket of the Peoples Democratic Party (PDP) for next year’s election has pitched aspirants from Southeast with two governors from the region.

Four presidential aspirants from the Southeast have complained that Governors Okezie Ikpeazu of Abia state and his Enugu state counterpart, Ifeanyi Ugwuanyi, are working against their aspirations.

They have expressed disappointment with the two governors over their alleged support for another aspirant from the Southsouth, Rivers State Governor Nyesom Wike.

The friction between the aspirants and the two governors got to a climax at the weekend when they attended stakeholders meetings on Friday and Saturday where they reiterated their demand zoning to the South.

Ikpeazu and Ugwuanyi had joined four other PDP governors at a meeting on Friday night without inviting the four Southeast contenders.

The Abia and Enugu governors had attended the meeting with Governors Seyi Makinde (Oyo); Wike (Rivers); Duoye Diri (Bayelsa) and Udom Emmanuel ( Akwa Ibom), who hosted the meeting in Abuja.

The six PDP governors, had, after their meeting, reiterated their demand for zoning to the South.

However, there were speculations that the governors had adopted a resolution at the meeting to support one of their own, who is also eyeing the ticket.

Piqued by the actions of the two governors, the four presidential aspirants have also called a meeting on Saturday where they demanded zoning to the Southeast.

The meeting, which held at a popular hotel in Asokoro District, Abuja, was attended by all the four aspirants.

Anyim, who addressed reporters after the meeting, was diplomatic when asked if the four aspirants were working in tandem with the PDP Southern governors that met the previous day.

He asked reporters to direct the question to the PDP Southern Governors.

Anyim said: “Whatever they (PDP Southern governors) are doing or whatever they are not doing is not necessarily before us. So, when you meet them in their own meeting, you can ask them.

“We believe that the PDP constitution favours what we are doing and we have to boldly step out with this position”.

A top PDP chieftain confided in our correspondent yesterday that the four aspirants became suspicious when the six governors did not invite them to their Friday meeting.

The party chieftain, who did not want his name in print because of the sensitivity of the matter, further hinted that Anyim and his fellow aspirants felt betrayed by the two governors from their zone.

“The four aspirants from the Southeast felt betrayed by the two governors from the zone, considering the loud clamour by the zone to produce the next president of Nigeria.

“This is more painful to the entire people of the Southeast, who have never produced a president since this current democratic journey started in 1999.

“More so, they feel aggrieved because the North, Southwest and the Southsouth, which their two governors are allegedly backing, have taken the presidency on the platform of the PDP for a period that would have run cumulatively to 24 years by 2023.

“So it’s a surprise to the four aspirants and stakeholders in the Southeast that the two PDP governors from the zone would abandon their own and line up behind an aspirant from the Southsouth whose zone had occupied the presidency for six odd years through Dr. Goodluck Jonathan”, the source said.

There was division in the main opposition party a few weeks ago when Wike called for zoning to the Southsouth.

Wike has described the Southsouth as the “pillar” of the PDP, adding that the zone should not only be consigned to working for the PDP, but should also be considered for the presidency.

A former PDP National Publicity Secretary, Chief Olisa Metuh, faulted Wike’s position, wondering why he shifted the agitation from “the South” to the Southsouth.

Metuh, who spoke at a political event in Abuja a few days ago, said Wike’s position indicated that the Southeast had been relegated to the background.

Also, Metuh, in a memo to the PDP Southern Governors last week, cautioned the governors against actions that could relegate the Southeast to the background.

Metuh’s memo, which pre-empted last Friday’s meeting of the PDP Southern governors, argued that the best way to take the civil war syndrome off the psyche of the Igbo is to zone the ticket to the Southeast.

Metuh’s memo reads in part: “You will recall that I joined millions of party members to oppose the zoning of our presidential ticket. The reason is to avoid the conspiracy to anoint an ordained aspirant who has the unfettered access to limitless funds for the primaries.

“I write to you as someone who participated actively during the process to select most of you as candidates for the 2015 elections.

“Fortunately, you all can attest to my integrity and altruism during that process as I was totally concerned more with the peace and progress of our party than any mundane or personal interest, just as in the process right now.

“It is more like an open secret that the Southern governors will meet most probably this weekend to drum up support for a Southern candidate.

“Millions of our members will jubilate if this actually is meant to achieve a South Eastern candidacy. Unfortunately, this is so far from your planning at the moment.

“I would like to draw your attention to the reality that Nigerians actually desire a South Eastern Presidency to end the civil war syndrome and once for all, achieve a true national unity. More importantly, some of the best aspirants are actually from the Southeast.

“For competence, merit, peace, fairness and many other reasons, the Southern Governors Forum of the PDP should pick a consensus candidate from the South East.

“Nigerians desire a Southern Eastern President but then, only a National Consensus can achieve this perfect yearning. Let the Southern Governors lead this quest for the overall interest of our party and our nation, Nigeria.

“Let me forewarn sirs, that there is a clear and present danger of achieving candidacy with contacts and stupendous display of wealth but not achieving victory at the general election. It will definitely be a PYRRHIC VICTORY to nominate a strong aspirant but a weak candidate.

“Your Excellencies, the commanders of our faithful, please harken to the voice of the led and let reason prevail over comradeship.

“May God bless you all as you get set to wind down your wonderful eight years tenures, in less than 14 months”.