I have just read the mischievous, false and ludicrous allegation made against me, Sen. Chief Edwin Kiagbodo Clark, in the various media, particularly the social media, which was brought to my attention, that I own, or I am associated with a certain company named *Genuine Construction Engineering Ltd*, which was awarded a contract for shoreline protection project, which was captured in the Budget of the Niger Delta Development Commission (NDDC), in 2010, amounting to the sum of N7,973,336,024.75, and situated at Ogbolomabiri Community in the Nembe Local Government Area of Bayelsa State, and that 90% of the contract sum was released to me. 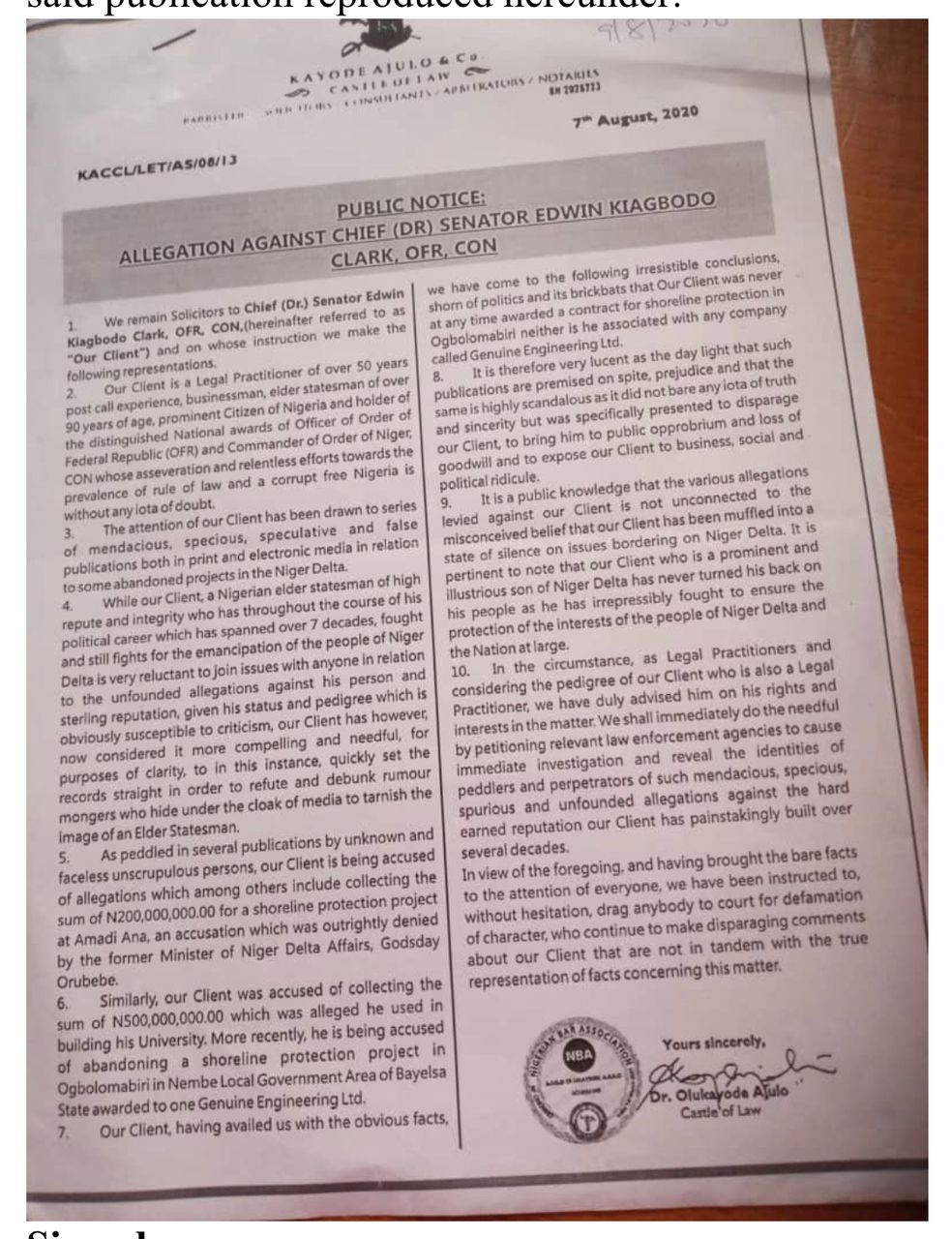 These malicious, wicked and fabricated allegations are not true. We have been down this road before. These same jobbers who are hired to lie against me, a 94-year-old man, had earlier, about a year ago, spread these false rumours to tarnish my reputation, but their lies fell flat on their faces. At that time, I promptly refuted their allegations against me on the 7th and 8th of August, 2020, through my Lawyer, Barrister Olukayode (Dr.) Ajulo. His rebuttal was advertised in the Vanguard Newspaper of 9th August, 2020.

I am presently in the United Kingdom, from where my attention was drawn to this fabricated, cruel and malicious publication of what I will now like to describe as a yearly ritual for those who are afraid of me, and of course their cohorts, commentators and warped, jobless and ignorant politicians, who have promptly made several comments in favour of an untrue story, believing that they can browbeat me, or stop me from making public statements on national issues, particularly on the mandatory need to restructure Nigeria, either in my position as elder statesman; Chairman, Southern/Middlebelt Leaders’ Forum and as Leader of the Pan Niger Delta Forum (PANDEF).

Well shame to these traducers, because they have failed woefully and will continue to fail. Whom God has blessed; no man can curse. No human being created by God either in Nigeria or anywhere else in the world, can or will succeed in blackmailing me to submission. It is not a boast, it is a humble appreciation of God’s mercies and blessings, which have been bestowed upon me.

I deliberately did not instruct my Lawyer to name the owners and Directors of the said Genuine Construction Engineering Ltd, when the allegations were first made last year, because the information is there in public domain as provided by the Corporate Affairs Commission (CAC), and at the NDDC Office, which knows to whom it awarded the contract.

I expected these cruel and intellectually lazy commentators and politicians, to have done their research before putting their mouth, or should I say their fingers, to make comments and type on a matter they know nothing about.

Also, the owners and Directors of the said company, have decided, for reasons best known to them, to remain silent.

I have, therefore, decided, after intensive investigation, to disclose the ownership of the said Genuine Construction Engineering Ltd, and the particulars of its directors.

I want to once again, categorically state that as follows:

1. I do not have any foreshore protection contract at Ogbolomabiri in Nembe Local Government Area of Bayelsa State.

2. I do not have any connections or association, whatsoever, with the said company, Genuine Construction Engineering Ltd.

3. I wish to reassure my family, friends, associates and fellow compatriots, who believe and trust me, that I am completely innocent of all these accusations linking me with the said company, Genuine Construction Engineering Ltd.

I issue this notice as a final warning and advice to the purveyors of these fake news, to desist from maligning and tarnishing my name.

This warning also goes to those who make unfounded comments in support of lies thrown against innocent persons without bothering to find out the truth. It will be recalled that such warning was contained in the public notice issued last year by my Lawyer when this same malicious, mischievous and unfounded allegation was made against me, as reflected by the said publication reproduced hereunder: