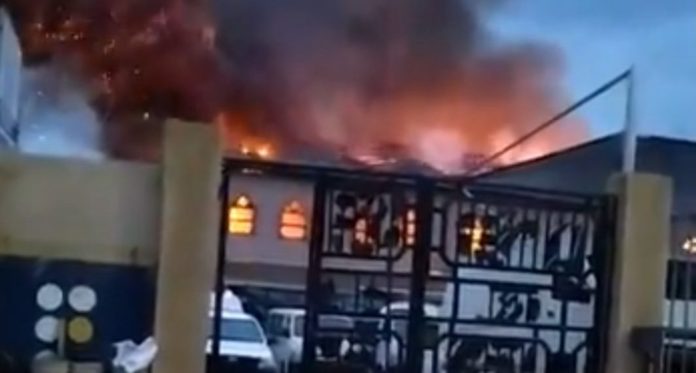 Another blow has hit the Redeemed Christian Church of God, RCCG, as fire razed the Province 28 headquarters of the church in Lagos.

This is coming less than a week after Pastor Dare Adeboye, son of the General Overseer, RCCG, Pastor Enoch Adeboye died.

Spokesperson, Lagos State Police Command, Muyiwa Adejobi, in a statement said the incident occurred on Sunday at about 6:15am.

Adejobi said the church is located on Lagos-Ibadan Expressway after China Town.

According to him, the Divisional Police Officer (DPO), Ogun raised to the scene when the incident occurred and quickly alerted the Lagos State Fire Service.

He said no life was lost except the building razed by the inferno.

Today being 9/5/21 at about 06:15hrs the Redeem Christian Church of God, Lagos Province 28 HQ, Lagos Expressway after China town was on fire.

“The DPO Ogudu who raised down to the scene alerted the Lagos State Fire Service and the fire was put out. No life was lost to the inferno, only the property destroyed. Cause of fire yet unknown.

“The Commissioner of Police, Lagos State, CP Hakeem Odumosu has ordered the DPO should police the scene to avoid any looting and that the Lagos State Fire Service to commence investigation into the incident,” he said.