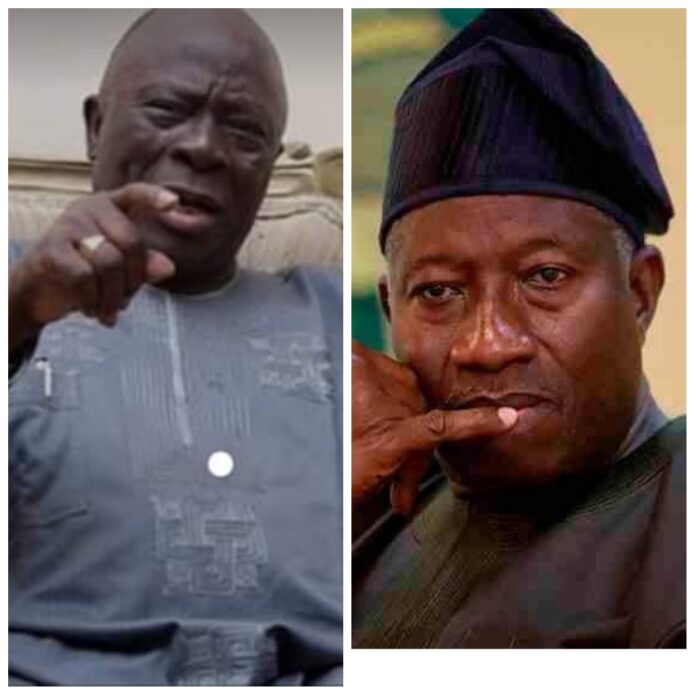 As the agitation for South-East Presidency assumed a front burner on Monday with socio-political organisations insisting that it was the turn of the Igbo to produce the next president in 2023, Afenifere leader, Pa Ayo Adebanjo, lambasted former President Goodluck Jonathan, for mulling the idea of contesting the presidency during next year’s election.

Among the organisation which supported Igbo presidency were Yoruba socio-political organisation, Afenifere, Pan-Niger Delta Forum and Middle Belt Forum. They reiterated their calls for the presidency to be micro zoned to the South-East for equity, justice and fairness in 2023.

They were unanimous that if the political class and the retired military generals could concede the presidency to the South-West in 1999, the same approach could be adopted and micro-zone it to the South-East.

The MBF, Afenifere, PANDEF and other groups bared their minds during the Greater Nigeria Conference which held in Abuja, organized by leaders and friends of the South East geo-political zone, with the theme, “Together we can.

Elder statesman, nationalist and leader of Afenifere, Adebanjo said there was a need for aspirants from the South, especially from the South-East to be united.

According to him, the decision of presidential aspirants including the Minister of Transportation, Rotimi Amaechi and the Governor of Rivers state, Nyesom Wike who are from the South South to contest would only give the North undue advantage over the South.

debanjo stated that the truth was that the North did not want to leave power in 2023.

He said, “I only like to point to the fact that they are just deceiving you. All that you are hearing that they (the North) are supporting the South-West is an element of deceit to deprive you to be able to rule you. They don’t like anybody.

“The unfortunate thing is that President Goodluck Jonathan allowed himself to be disgraced by mentioning the fact that, ‘I’m considering whether to be President’; for what? Who are you consulting?”

The nonagenarian wondered why political leaders from the North were now propounding a lot of theories when they realized it was the turn of the South-East to produce the President in 2023.

“Now that it is the turn of the South-East, they are propounding a new theory, it must be based on merit and all that. If it is the question of merit, who in the North? All of them…if it has been based on merit till today, till kingdom comes, the East alone will produce the President”, he said.

The Afenifere leader said that all the talks that the aspirants from the South must go and lobby, campaign and sell themselves was all rigmarole, saying the North knows the truth

“Although I don’t like all the people that came out from the East. But for the fact that they are saying you have no people, I’m happy you demonstrate that (you have people). But go and unite. A house divided against itself will not stand,” Adebanjo advised.