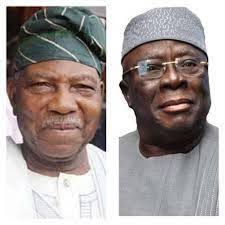 Afenifere leader Pa Reuben Fasoranti has said that the meeting of the socio-political organisation will henceforth hold in Akure, capital of Ondo State.

He said the leaders of the group will no longer converge on Isoya Ogbo, Ijebu home of the acting leader, Chief Ayo Adebanjo.

Following the shifting of meeting venue to the residence of the leader, Adebanjo may have ceased to be acting leader.

He rejected the insinuations that he was paid to endorse the Jagaban Borgu, saying that he has been a man of principle all his life.

Fasoranti said those who started meeting at Ogbo after naming Adebanjo as acting leader misunderstood and misinterpreted him.

He lamented that these people shifted the meeting of Afenifere to Adebanjo’s residence because they felt he was becoming senile.

Fasoranti said some people felt he could not comprehend things, adding that the person who said that has regretted it.

However, Fasoranti said he is not senile, adding that “there is no shaking.”

He stressed:”The reason the meeting was shifted was due to misunderstanding and misinterpretation of some people that I was going senile and that I cannot comprehend. When I heard that, I reacted and the person saying that regretted it. ”

In a viral video at his Akure residence, the old ‘Action Grouper’ said he will now communicate meeting schedules to Afenifere members after liasoning with the secretary and other leaders on meeting agenda.

He maintained that most Afenifere chieftains have said they will not go to Ogbo for meetings.

Following the return of meeting venue to Akure, many Afenifere chieftains disclosed that Adebanjo has ceased to be acting leader.

A chieftain, who spoke on phone, said:”There can’t be two leaders at a time.”

Another chieftain said Adebanjo may fight back, but from a weak position, adding that the group should prepare for crisis management.

The Afenifere leader said there is no meeting point between Afenifere and Ohanaeze Ndigbo, pointing out that they are two different ethnic organisations.

Fasoranti promised to leave a legacy of stability and honesty in Afenifere.

He said the organisation will continue to pursue restructuring as a cardinal belief.

The elderstatesman threw his weight behind the agitation for the use of arms and ammunition by Amotekun to effectively protect the Southwest, stressing that Governor Rotimi Akeredolu who is championing the crusade was on course.