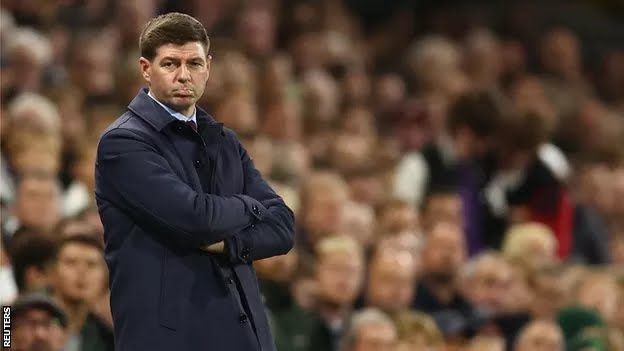 A club spokesman said: “We would like to thank Steven for his hard work and commitment and wish him well for the future.”

Villa have won just twice in the league this season and only sit above the relegation zone on goals scored.

Gerrard succeeded Dean Smith as Villa manager in November 2021 after leaving his role at Rangers.

But the former England and Liverpool midfielder, 42, led Villa to only 13 wins from 40 games during his 11 months in charge.

Fulham beat Villa in Gerrard’s final game
After the defeat by Fulham, he told BBC Match of the Day: “Inconsistency has cost us, that’s the position we find ourselves in. I took over the team in a very similar situation. We’ve tried to recruit to get us out of that situation.

About an hour later his time as Villa boss was over.

Before Gerrard’s departure was revealed, captain John McGinn said: “It’s embarrassing to be part of. We’ve let the travelling fans down, the manager down. It’s a bad night for us.

“It doesn’t matter who’s in charge of that team. It’s nothing to do with the manager – the players have to look at themselves in the mirror. We’ve definitely not lost faith in [the manager] – it’s us who are responsible.

“He’s a top manager, he’s hurting just as the players are. We’ve let him down tonight. It’s up to us now to put in a performance for him.”

In Gerrard’s time at Villa he signed some high-profile players including Barcelona forward Phillipe Coutinho, Sevilla defender Diego Carlos and French midfielder Boubacar Kamara, who had been linked with some of Europe’s top sides.