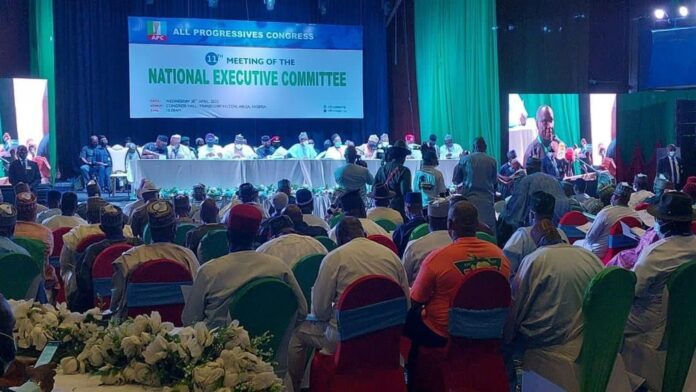 The National Executive Committee (NEC) of the ruling All Progressivess Congress (APC) has fixed the cost of its presidential expression of interest and nomination forms at N100 million.

The spokesperson of the party, Felix Morka, disclosed this at the end of the emergency NEC on Wednesday at the Transcorp Hilton in Abuja.

He said the expression of interest form is N30 million while the nomination form is N70 million.

So far, about 10 aspirants have declared interest to be the flag bearer of the party for the 2023 general elections.

Those who have declared interest are ex-Lagos governor Bola Tinubu, Vice President Yemi Osinbajo, the Minister of Transportation, Rotimi Amaechi and the Minister of Labour and Productivity, Chris Ngige.

For governors, the party approved N50 million for both nomination and expression of interest, while Senate and House of Representatives aspirants are to pay N20 million and N10 million respectively.

Those for states legislative seats are to pay N2 million for both forms.

Meanwhile, the NEC made 50 per cent discount for candidates less than 40 years and free tickets for women and persons living with disabilities.

The sales of the party form shall commence on April 23 and primary for the presidential ticket has been scheduled to hold from May 30 to June 1.

Other resolutions by the NEC include; a decision on the mode of primaries.

NEC adopted indirect primaries which means that delegates will decide the flag bearers of the party.

Also, the decision making power of the National Executive Committee (NEC) has been transferred to the Abdullahi Adamu-led National Working Committee (NWC) for a period of 90 days.