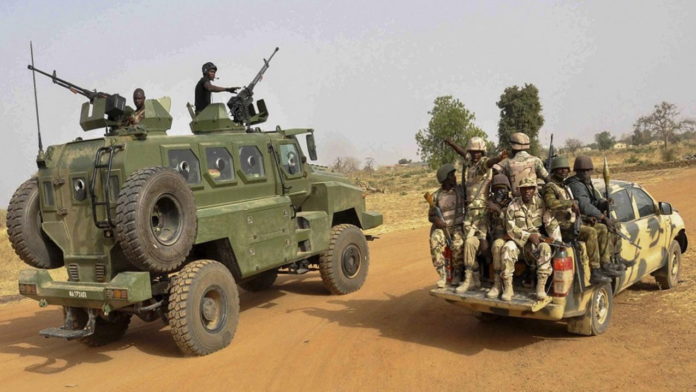 Troops of Operation Hadarin Daji have repelled what could have been a deadly attack on Bakura Village in Zamfara State, Mr Aminu Suleiman told Channels Television.

Suleiman, who is the sole administrator of Bakura Local Government Area of the state, narrated how the incident occurred during an interview on Wednesday.

He said the heavily armed bandits, in their large numbers, launched the attack on the community at about 1:30pm on Tuesday and rustled several cattle and other items from the locals.

According to the council boss, some locals resisted the bandits from leaving with the stolen cattle which led to the bandits firing sporadic gunshots.

In the process, about 10 residents sustained various degrees of injury and one of them died later.

“The locals were trying to prevent them from leaving with the cattle; that was when they sustained the gunshot injuries,” Suleiman recounted. “Two were seriously injured and we took them to Sokoto Hospital, the remaining ones were treated at the General Hospital, Bakura.”

He stated that not long after the terrorists invaded the community, troops of Operation Hadarin Daji stationed in Bakura town quickly mobilised to the area alongside some local vigilantes to engage the bandits.

“Luckily enough, we have many troops there because apart from the main troops in Bakura town, we have some to clear our forest. So, 10 gun trucks mobilised to the place immediately,” the Council boss stated.

The security operatives, according to him, killed many of the bandits while some of the terrorists escaped with gunshot wounds.

Suleiman added that all the rustled cattle and other valuable items were recovered from the bandits, as well as three AK-47 rifles and one operational motorcycle.

“They (troops) engaged them (the bandits) in a gun battle, killing some of them and recovered weapons and their motorcycle,” he said. “Residents should always be vigilant and pass the necessary information to military personnel.

“They succeeded yesterday because we got the information on time; so, if residents corporate by giving out the information at the appropriate time, we will succeed all the time. There’s no way bandits will attack a town like Bakura in the afternoon and escape with cattle.”

A resident of Bakura village, who pleaded anonymity, also recounted how the incident occurred, saying the armed men shot sporadically to scare residents who ran for safety.

He, however, said the bandits were unlucky as troops deployed at Bakura town responded swiftly and engaged them in a fierce gun battle that lasted about two hours.

According to the resident, the superior firepower of the soldiers forced the bandits to abandon the rustled cattle and flee into the forest with many of them sustaining various degrees of gunshot wounds.

He added that the troops killed many of the terrorists as some of them were seen carried by their accomplices towards the forest after they were immobilised by the gunshot injuries sustained.

“We are happy with the quick response of the Nigerian Army troops here in Bakura,” the source said. “They have assisted us in killing many of the bandits who invaded our community and they also helped us to recover all the cattle stolen by the bandits.”