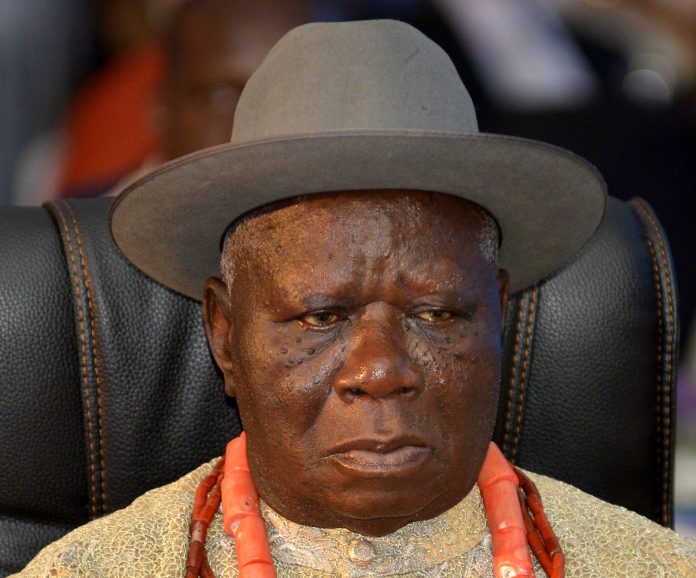 Former Federal Commissioner of Information, Chief Edwin Clark, has petitioned President Muhammadu Buhari, over the invasion of his Abuja home.
Clark, in the petition signed by his lawyer, Dr. Kayode Ajulo of Kayode Ajulo Castle of Law in Abuja, demanded for a comprehensive probe of the action of the policemen, three of whom were dismissed from service on Thursday.
The policemen were dismissed on the orders of the Inspector General of Police, Ibrahim Idris, while the fate of the fourth officer will be determined by the Police Service Commission.
The petition, to which the attention of the National Security Adviser, Major General Mohammed Babagana Monguno, was drawn, had it copied to the President of the Senate, Speaker of the House of Representatives, Attorney-General of the Federation and Minister of Justice, Minister of Interior, Chairman of the Police Service Commission and President of the Nigerian Bar Association.
It reads:

Dear Sir,
PETITION AND A CALL FOR A COMPREHENSIVE PROBE OVER THE UNWARRANTED RAID OF THE RESIDENCE OF CHIEF EDWIN KIAGBODO CLARK, OFR, CON.
The above subject matter refers.
INTRODUCTION

FACTUAL MATRIX
3. Our Client did brief us that at about 12:30pm on Tuesday, the 4th day of September, 2018, officers and men of the IGP Tactical Squad (a unit under the direct command of the Inspector General of Police) alongside pressmen invaded and ransacked his Asokoro residence on the pretext that they were in search of arms and ammunitions. However, despite the siege and search, they found nothing incriminating on our Client.
4. Having so searched in vain, the Inspector General of Police in the face of the impudent search conducted on the property of our Client, has publicly denied any knowledge of the said search and has immediately ordered the arrest of the four (4) junior officers who were responsible for the search and tendered a public apology to our Client.
5. Taking into the consideration the circumstances of the invasion and uncivilized search conducted on his property, and the attendant embarrassment caused to our client and what he stands for, it is imperative to hold the view that there are serious questions which ought to be determined forthwith and without mincing words.
6. It will be rather unfortunate for junior officers and men of the IGP Tactical squad who were at best acting on the orders of their superiors to fall prey in this regard.
7. It beats our Client’s imagination that despite the fact that our Client has the compliments of the Nigeria Police Force and the State Security Services protecting him, his property, and overseeing his daily activities, such level of conspiracy could be perpetuated against him. He wonders what exactly warranted such unfounded suspicion on his person to the extent that a search warrant could be procured against him on the demeaning allegation that he is involved in gun running.
8. Our client further briefed us and we confirmed that at the point where officers and men of the IGP Tactical Squad were to commence their search having introduced themselves, stating that they were acting under the instructions of the Inspector General of Police and Deputy Commissioner of Police Yusuf Kolo as their commander. Ambassador Boladei Igali (Former SSG Bayelsa State and former Permanent Secretary Ministry of Power) who was with our client at venue of the search put a call through to Assistant Inspector General of Police (Federal Intelligence) Umoru Usman Shehu who spoke with the leader of the search party and gave authority to go ahead with the search.
9. It is therefore baffling and unfortunate that the top echelon of the Nigeria Police Force will publicly and brazenly deny the knowledge of the search conducted on such an eminent personality as our Client, in spite of the evidence of clear contacts made with them before the search commenced.
10. However, in the face of all the denials and apologies, our Client believes that there was an extreme level of conspiracy involved in this case which ought to be duly probed and investigated.

ISSUES FOR INTERROGATION
11. Having critically considered the issues at hand we have respectfully raised the following salient questions for determination;
a. What was the ground for the reasonable suspicion which warranted the procurement of a search warrant on the residence of our client?
b. Knowing fully well that the Nigeria Police Force has its rank and file, could it be said that the 4 arrested officers of the IGP Tactical Squad, being a unit under the Inspector General of Police, acted on their own volition without any authority of a superior officer?
c. Who is the senior officer that authorized the procurement of the search warrant, knowing fully well the perquisite and procedure of procuring such warrant?
d. Will it not be right to say that the act of the conspirators is calculated to intimidate, harass, embarrass and humiliate the person of our client and ultimately cause unrest and commotion in the Niger-Delta Region?
e. Could it be inferred that there is a deliberate mischief calculated to embarrass the government of the day by provoking disturbances in the Niger-Delta Region, which has experience relative peace in the recent time?
12. The above are salient questions which ought to be thoroughly explained, in detail, for the sake of posterity and our National integrity which ought to be preserved.
13. It is public knowledge that our client has been a frontline advocate against taking up of arms by the youths of the Niger-Delta and he has been responsible for brokering peace between the Niger-Delta and several administrations in Nigeria, in leading the Pan Niger Delta Forum (PANDEF), our client has join other stakeholders to put a halt to youth restiveness and wanton destruction of oil pipelines in the region and ultimately restore peace, thereby increasing production of Nigeria’s sustenance in oil production and encouraging foreign participation, however the invasion of his Asokoro-Abuja residence has since fanned wrong embers, caused uproar and pandemonium in the Niger-Delta of which our clients and others have been assiduously working to curtail.

OUR DEMANDS
14. Our client appreciates unreserved double apologies by the Nigerian Police; the first which was conveyed by the delegation of the IGP lead by Deputy Inspector General of Police, Habila Joshak (Operations), Assistant Inspector General of Police, David Ogbodo (Legal), Commissioner of Police Abu Sani (IGP Monitoring Unit) and Commissioner of Police of FCT and the second which was publicly tendered on behalf of the Nigerian Police Force by the Force PRO Deputy Commissioner of Police, Jimoh Moshood.
15. While our client accept the apologies, it is his sole demand that this case be comprehensively probed and thoroughly investigated to fish out all the conspirators who masterminded the invasion of his residence without due cause.
16. While we await your prompt reaction to this petition, we assure you of our highest profession regards.
Thank you.
Yours faithfully,
For Kayode Ajulo & Co. Castle of Law.