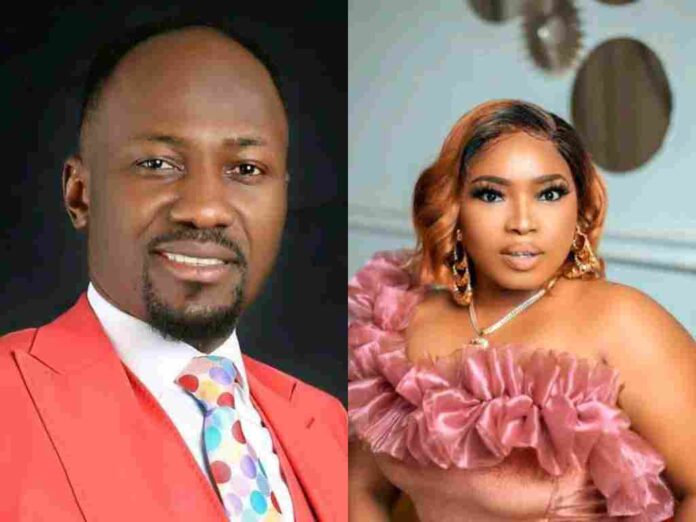 Halima Abubakar, the Nigerian actress, has broken her silence over her alleged affair with Apostle Johnson Suleman.

Suleman, the general overseer of the Omega Fire Ministries International, has been enmeshed in the labyrinth of “sex scandals” in the past years.

In July, the cleric was in the news again after a blog claimed he had affair with a host of Nigerian actresses including Abubakar, Georgina Onuoha, Queen Nwokoye, Shan George, and Vivian Metchie.

At the time, the report sparked heated reactions on social media, with several of the named actresses dismissing the allegation.

Suleman also debunked the post and described the list as an unrealistic litany of names curated to bring him down.

In a dramatic twist on Sunday, Abubakar took to her Instagram stories to call out Suleman.

The film star claimed she agreed to date him at the time because the cleric told him he had separated from his wife.

“I f*ck up yes. I own my mistakes. But I won’t lie anymore. Nigga said he was separated. I didn’t meet a married man. I met a bizman with three kids. Long story, stay away from liars,” she wrote.

In another post, Abubakar also accused the clergyman of paying blogs monthly to promote lies.

“Every month only you. How do you sleep? You paid off the blogs, only you, God forbid. Look for lies and send it to your bloggers. They need am,” she added.

“But you you you JS. You bought market Sule. Emperor Sule. Allow me rest biko. Don’t fuck with me bro. Dude.”

Abubakar had earlier engaged Shan George in a war of words over the alleged affair involving the cleric.

As of the time of this report, Suleman has not reacted to Abubakar’s claim.