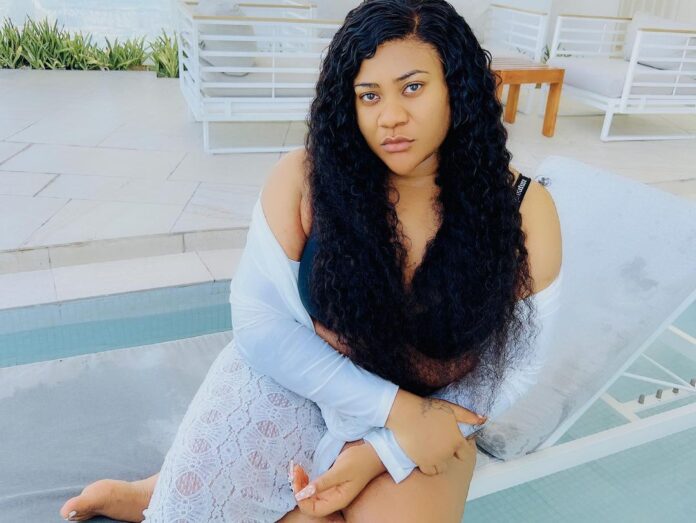 Actress Nkechi Blessing Sunday has said she accepted to date her ex-lover, Opeyemi Falegan to get back at one of her exes.

She and Falegan fell apart in April in what many would consider one of the messiest breakups.

The crash of the relationship was characterised by accusations and counter accusations.

The duo opened can of worms for weeks unending following news of their crashed relationship barely a year after finding love in each other’s arms.

In a recent development, the actress who was a guest on the popular morning show, “Your View” spoke about why she ended up in a relationship with Falegan.

She explained her intention for accepting Falegan’s relationship proposal was simply to make her US-based ex, Mike Adeyemi jealous at the time.

The controversial film star said she did what she did because her ex was busying posting a new girl’s photo even though they were still trying to salvage their sinking relationship.

She said: “I was going to keep this for my YouTube channel but let me just break everything down. And I wouldn’t want anybody to make the kind of mistake that I made.

“I recently broke out from a relationship, my ex that lives in America. And in the heat of the break-up, we were still trying to fix things, he started posting pictures of a girl; covering her face.

“And I realised there was this girl trying to ask me out. Okay fine man but in all ramifications of the people I would like to date, he’s not 1 to 10.

“So, that was me trying to use him to get back at my ex. Then, I landed up in a relationship. So, it was just like let’s…. not love.’