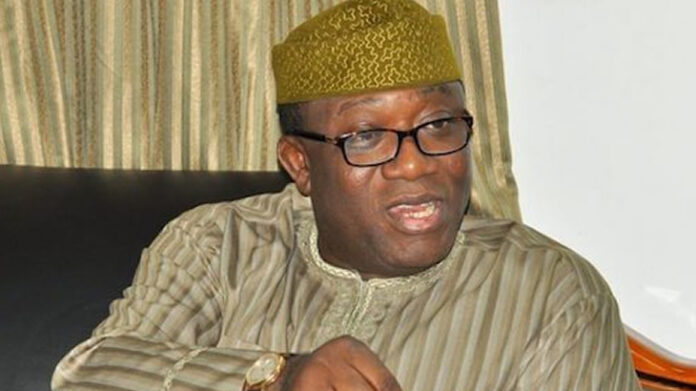 The Nigeria Governors’ Forum (NGF) has asked the Federal Government to be ruthless with bandits and other criminals behind the nation’s heightening security challenges.
It pledged to work with the President to ensure that all necessary measures are put in place to reverse the spate of insecurity in the country.
NGF Chairman and Governor of Ekiti State, Kayode Fayemi, spoke for the group during a visit to his Kaduna State counterpart, Nasir el-Rufai, over the recent train attack in the state.
In a statement issued late yesterday, NGF’s spokesman, Abdulrazaque Bello-Barkindo, quoted Fayemi as saying: “I agree that we as governors must join hands with the President to deal ruthlessly with the bandits, that they be crushed, as you have always advocated,” referring to what El-Rufai had advocated before now.
Fayemi said he equally shares El-Rufai’s suggestion that the Federal. Government takes proactive action by going after the bandits right in their enclaves and rooting them out.
Fayemi, who announced a N50 million donation, noted that the primary purpose of government is ensuring the safety of lives and property.
He added that with the current state of affairs, the impression in the minds of most Nigerians presently is that nothing is being done by the security agencies in the country to bring an end to this.
Fayemi said: “We are here to commiserate with you, your government and the people of Kaduna State; to show solidarity with them and align with the governor who, as a public servant all his life, has been a focused leader from who we must learn to ensure peace in our communities.”
The NGF Chairman, who described the train attack as mind-boggling in view of the number of casualties and other fatalities, noted that the criminals were audacious enough to also take away some hostages, which raises the state of insecurity in the region to the level of uncertainties.
The Ekiti State governor wondered if the entire crime was the handiwork of some enemies of the state government or its governor who he said is transforming the state to their chagrin and are therefore working to distract the state from its path to development.
Fayemi regretted that everything is currently unnecessarily revolving around 2023, the election year, “which we are not even sure we will be alive to see with the prevailing state of circumstances”, and advised that more should be done towards securing the country.
He said the Northwest of the country had been a region of calm and consensus before now and emphasised that whatever it is to do, governors will continue to put heads together along with the President, who he said is also very worried about the sequence of attacks, to bring sanity back to the country.
The NGF chairman, who noted that the country was worth dying for regardless of whatever anyone thinks, advised El-Rufai not to relent in his efforts at building the state and to continue to be the leader that he has always been.
El-Rufai stated that the bandits behind the attack are currently hiding somewhere in Niger State.
He disclosed that there were 61 Kaduna indigenes still recuperating from the train attack, including a top government official and his eight-month pregnant wife.
El-Rufai regretted that the attack was avoidable because the state government had tipped the Nigeria Railways Corporation twice about the impending attack, pleading with the NRC to suspend night trains.
He added that when the NRC failed to act, the state government went to the Minister for Transportation, but still their complaints were not heeded.
The Kaduna State governor, who advised that the situation should not be treated with levity, noted that the state of things in the Northwest is worse than the Boko Haram of the Northeast, adding that there is an international dimension to it.
El Rufai showed his visitors a letter he said the state government was writing to the President on the issue.
He thanked the NGF delegation, which included Governor Muhammadu Badaru of Jigawa State, for its efforts and the donation.
Earlier, Kaduna State Deputy Governor, Dr Hadiza Balarabe, had called the train attack a demoralising experience which she prayed the state would never witness again.
Balarabe said the NGF and its members have been such good friends whose support the state values and places high premium on.
She pledged that the Kaduna State Government would continue to do its best in supporting the security forces in the state to accomplish the task of securing lives and property while still working hard to find lasting solutions to the problem, in such a way that it never repeats itself