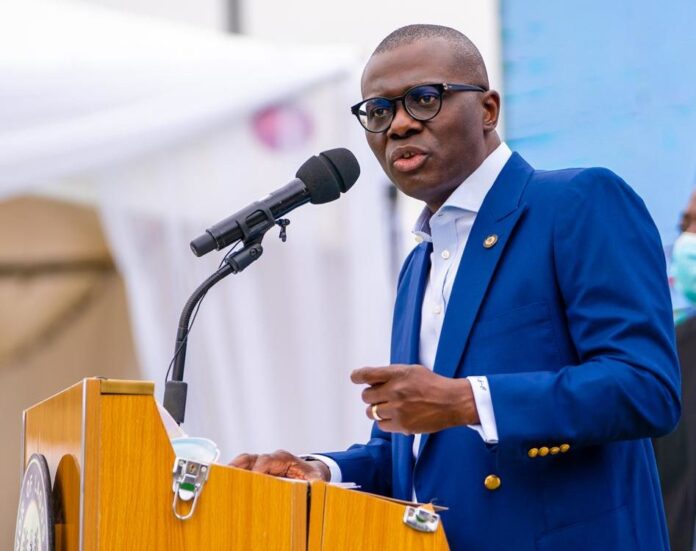 Lagos State Governor, Mr. Babajide Sanwo-Olu on Friday said Lagos is a victim of its success, noting that his administration is committed to advancing its course in providing security for lives and property to keep Lagos Safe, quality education among other amenities.

He made the statement at the first Comrade Yinka Odumakin lecture and book presentation in honour of the late human rights activist and National Publicity Secretary of the Yoruba socio-cultural organisation, Afenifere, who died last year.

Governor Sanwo-Olu who was represented by Lagos State Commissioner for Information and Strategy, Mr. Gbenga Omotoso, said Odumakin is being celebrated today as a result of “his loyalty to a course that he believed in; loyalty to freedom, unity and everything that would make the common man have peace and enjoy everything that he is supposed to enjoy in Nigeria.”

He also expressed Lagos State Government support for the Oluyinka Odumakin Foundation set up to immortalise the late National Publicity Secretary of Afenifere.

“Lagos is simply a victim of its success. That everybody is coming to Lagos everyday shows that there is security in Lagos. We have done a lot of things legally to be able to get to where we are in terms of true federalism and whatever we need to do to advance the course, I will take the message to Governor Sanwo-Olu and he will instruct the Attorney-General and Commissioner for Justice to do whatever we can do to advance this course.

“I know we are doing a lot talking about true federalism, State Police and all of that. We are going to push through so that whatever we can do for us to keep Lagos safe for other states to really look at what we are doing in Lagos, we will do,” the Governor said.

In his address, Osun State Governor, Gboyega Oyetola, who was represented by his deputy, Mr. Benedict Alabi, said the book titled ‘Comrade’ which was written by the deceased widow, Dr. Joe Okei-Odumakin, would help to preserve the legacy of Yinka Odumakin.

Speaking at the event, leader of Yoruba socio-political group, Afenifere, Chief Ayo Adebanjo; Aare Onakakanfo of Yoruba land, Iba Gani Adams; right activist and lawyer, Chief Femi Falana (SAN), President of Oluyinka Odumakin Foundation and widow of the deceased, Dr. Joe Okei-Odumakin and others renewed the agitation for restructuring of the country and urged the Federal Government to restructure Nigeria before the 2023 general elections.

They also showered praise on the late Odumakin for his selfless service and passion for Nigeria and the common people during his lifetime, describing the late Afenifere spokesman as a committed, fearless, honest, defender of truth who fought for the future of Nigeria and the enthronement of social justice throughout his lifetime.

Adebanjo, who said he is still mourning the late Yinka Odumakin till date described him as a committed democrat, adding that he is yet to get a replacement for the late Afenifere National Publicity Secretary.

The Afenifere Leader, while speaking on the state of the nation, noted that without constitutional change, elections in the country would continue to be an exercise in futility.

Falana, who was the guest speaker at the occasion, called for the restoration of true federalism to continue the battle for a new Nigeria anchored on justice and fairness as the struggle for restructuring is for freedom.

He also commended Lagos State Government for showing leadership and championing true federalism through legal means by getting laudable judgement against the Federal Government on several issues.

A renowned clergy, Pastor Tunde Bakare noted that the greatest tribute to Odumakin is to continue to fight for the attainment of a society based on equity, fairness and justice which Yinka fought for during his lifetime.

Aare Adams said Nigeria can only get its acts together with restructuring, adding that the current constitutional arrangements was faulty and nothing could change with the 1999 Constitution foisted on Nigeria and Nigerians by the regime of General Abdulsalam Abubakar.

“The struggle for restructuring is the struggle for freedom. The challenge for the people that gathered here today is purely of a new Nigeria anchored on justice and fairness. This is the best way to immortalise Yinka Odumakin,” he said.

He also commended the wife of the deceased, Dr Joe Okei-Odumakin for writing the 110 pages book on the life and times of her husband and for establishing the Oluyinka Odumakin Foundation in his memory.

In her remarks, Okei-Odumakin reiterated her pledge and commitment to continue the struggle and ideals of her late husband and urged the government to do a lot more in ensuring the health and security of the people.

She also appreciated people for their love and support since the demise of her husband.