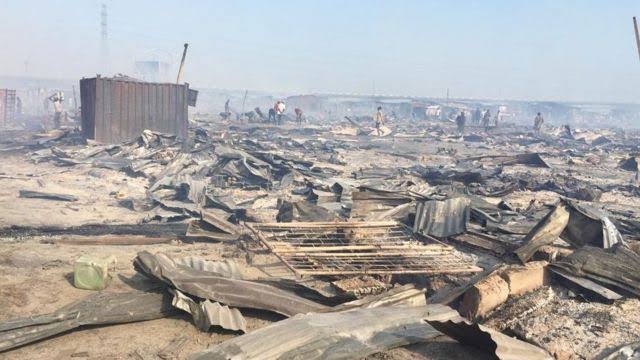 Shelter remains one of the most basic needs since the creation of man, as it is critical for living and survival. Aside food and clothing, shelter today is extremely vital especially in urban centres like Lagos State, with the high cost of housing rising even more sporadically on regular basis. This is why it is not unusual to sight various make-shifts and shanties in different urban areas of the state. In Ebute Metta, situated very close to the base of the Atlantic Ocean on the Lagos Mainland Local Government Area, several shanties litter the area, occupied by various kinds of people from different parts of the nation.

Many of these residents in make-shift houses and shanties largely made of woods and zincs have been occupying the spaces for hundreds of years and today, the present generation of the settlers seems to perhaps have forgotten the fact that there also exists, a present generation of the descendants of the real owners of the land. One of the lands presently creating grave tussle between these two categories of people is Oko Baba, the coastal land covering a massive space spanning the Oworonshoki axis to the Ijora Causeway stretch.

This gigantic geographical landscape is owned by none other than the revered Oloto Royal Family of Idejos from the Olofin clan. This royal clan is simply renowned as the largest land owning family in Lagos State and majority of the lands situated right inside Ebute Metta axis and its environs are owned by the Oloto Royal Family. The Oko Baba vast expanse of land is currently raising heated tension.

This community has turned into an epicenter of fear, tension and apprehension, brewing hot brouhaha between the Oloto Royal Family as represented by its Attorney, Aare Tomori Tanimowo Wiliams and present settlers of the community. This rancour is reported to have ignited several past ugly incidents allegedly sparked by the Oloto Royal Family who are hell-bent on repossessing their property on one hand and the present settlers on the lands on the other.

During a fact finding mission conducted by Lagos based journalists to the disputed area, the Oloto Royal Family represented by the attorney, Aare Tomori Williams pointed accusing fingers at the present settlers on the lands as being too ungrateful to the kind gestures granted by the forefathers of the Olotos. According to the investigation, the then settlers consisted mostly of saw millers who found the lands pleasant for their artisanship due to the lands’ proximity to the atlantic ocean where they could easily transport their goods through the waters with canoes or ferries.

This was because the third mainland bridge was not in existence prior to the trooping in of the settlers. It was also gathered that, the saw millers were able to fill the lands with saw dusts, an end product of their saw milling trade. Gradually, the settlers commenced building make-shift abodes using zincs and woods, living therein with their families.

However, for the fact that they (the settlers) co-habit in peace and tranquility, the Oloto Royal Families neither demanded for money from them nor raised an eyebrow on why they should construct make-shift houses on the lands that was not originally theirs.

Peace reigned in the community until the Oloto Royal Family and their representative Aare Tomori Williams realized that the settlers were steadily inviting several questionable elements into the community to work and live with them. The Oloto family and Aare Tomori then discovered that a large chunk of the invited settlers by the saw milling occupiers were people with traces of notorious characters. The family alleged that at a point, majority of the criminal activities and ugly menaces rocking the Ebute Metta, Oyingbo, Yaba, Onike, Makoko and environs were perpetrated by the boys from Oko Baba axis.

The family was said to have legal evidence about this as policemen and other security agencies have been severally involved to tackle the illegal activities of these criminal elements. Though some residents of Oko Baba area vehemently denied this allegation, it was also said that in the past, Oko Baba community has been gutted severally by ravaging fire outbreaks which had claimed several lives and property. These fire outbreaks were alleged to have been caused by the carelessness of the residents.

All these in addition to other atrocities and illegalities allegedly committed in the area spurred the Oloto Royal Family with the aide of Aare Tomori Williams to ensure the repossession and eviction of the residents in order to ensure peace and tranquility, and attract massive development into the Oko Baba community, Ebute Metta and Lagos State.

According to the family, the move was also vital to ensure that innocent residents of Ebute Metta communities go about their daily activities peacefully without any form of harassment from the miscreants and hoodlums hitherto dominating Oko Baba community.

According to the Attorney of Oloto Royal Family, High Chief Tomori Williams the Aare Onikoyi of Yoruba land, the Chairman/Chief Executive Officer of T. Williams Construction Company Limited, he affirmed that enough is enough for the illegal occupiers of Oko Baba community because the Lagos State government and those concerned were not in support of the many illegalities reigning supreme in the community.

He lamented that several crimes including daylight armed robbery, unwarranted vandalizing of innocent people’s properties, cultism, illegal trading and consumption of illicit and dangerous drugs, rape, under-aged sexual harassment and many more vices were perpetrated on regular basis by criminals domiciled in the shanties.

The entire area is currently filled with palpable fear, apprehension and suspicion as the crisis lingers. While the Oloto Royal Family claims it is hell-bent on vehemently chasing the residents of Oko Baba away in order to infuse sanity and peace into the community and rid it of criminal elements, members of the community insisted that the Lagos State Government remains the only authority that can make them vacate the land.