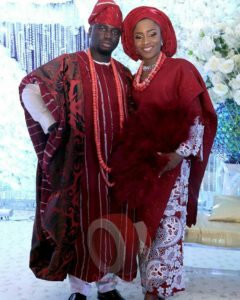 Say that former military administrator of Lagos state, who return in democratic dispensation to becoming the executive governor of Osun state, Prince Olagunsoye Oyinlola, is a fulfilled man will amount to stating the obvious as it is evident he’s been a success at everything he’s tried his hands on. In his private life as head of a family unit, Oyinlola  equipped his children with educational training and in turn the children are making him proud as they get into matrimony one after the other. Giving the hand of her daughter in marriage days back was simply an incident that put Prince Oyinlola in high spirit. It’s only an influential popular and powerful figure such as Oyinlola that could pull through caliber of guests that came in droves to celebrate with on his daughter’s wedding ceremony.

Richest man in Africa, Alhaji Aliko Dangote, Governor Rauf Aregbeola of Osun state, Billionaire Femi Otedola, Alaafin of Oyo, Oba Lamidi Adeyemi, Governor Abiola Ajimobi, Hajia Bola Shagaya were among  dignitaries that thronged Federal Palace hotel, venue of the wedding ceremony to felicitate with one of their own, Oyinlola, as his daughter quit spinsterhood to become a wife.  At the party where Evangelist Ebenezer Obey was the man at the band stand, a visibly elated host, Prince Oyilola could not contain his joy as he danced and danced to tunes as dished by Obe’s band.  His wife, who was equally in great mood, was all smiles as she played the role of a co-host to her husband. With all the trappings that were deployed, the memories of the  carnival like wedding ceremony will, for a long time remain in the mind of those who were privileged to attend.

The traditional wedding was between Oyinlaola’s daughter, Olayinka Oluwatomiloa Aduke and her lover, Olajuwon, son of a reputable international business man who hails from Ijebu, Chief Bukola Okunowo.