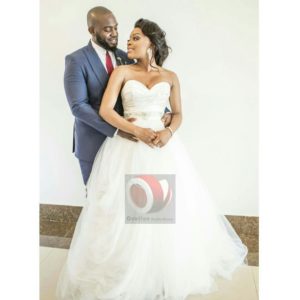 Adolphus Wabara was elected in to the upper chamber of the national assembly at the inception of the democratic dispensation in 1999 to represent a senatorial district in Abia state, but he did not came into the consciousness of the populace until 2003, when he occupied the seat of the senate president, which he vacated two years later. Since his ouster from the legislature, he’s not been very visible, even though, he’s still kicking at the political arena.

It was like revalidating his relevance recently, when he pampered his son with a wedding that could be referred to as classy in all ramifications, going by the standard and all that was committed to the two leg event.  The process of becoming one by Wabara’s son, Tamunotonye and his lover, Toluwani Oyefuga, kicked off on a traditional note, where the groom’s family had come to pay the dowry and observe other rites. Former president, Olusegun Obasanjo, was among major guests who were on hand to identify with the Wabara family.  The wedding proper would later take place at Our Saviors Church, Tafawa Balewa Square, Lagos Island, where the intertribal marriage between Abia born Tonye and Toluwani, from Irolu, Ogun state were pronounced man and wife in an atmosphere that radiated joy. The train later moved to prestigious Oriental Hotel, Lekki, where a classy and quality reception was held.  The new couple observed all programs meant for reception in exciting mood, even as the parents of the couple were equally overwhelmed by the joy of seeing their once infants grown and responsible enough to go into matrimony. While former governor of Ogun state, Otunba Gbenga Daniel was made the chairman of the occasion, many other dignitaries like Governor Ikpeazu of Abia state, Chief Raymond Dokpesi, Senator Ita Giwa, Oprah Benson, Abbah Folawiyo and so on were among those who honored Wabara with their presence.