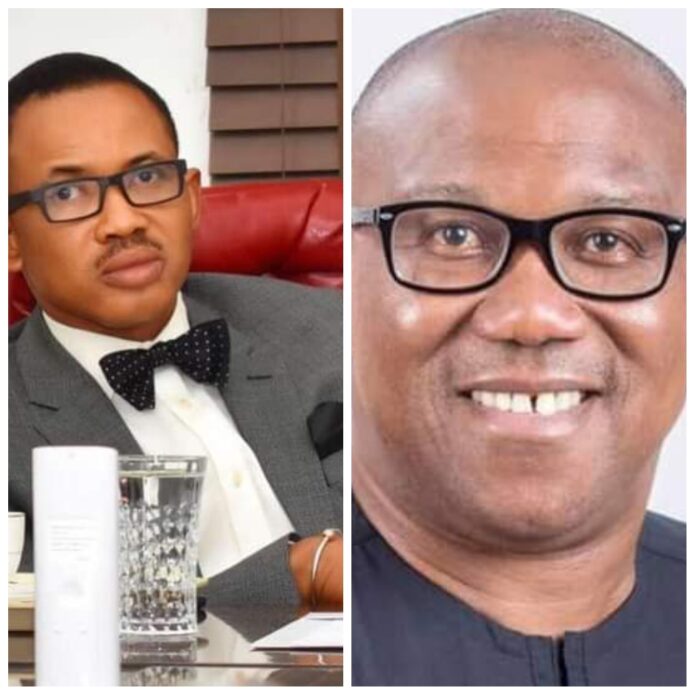 A former national secretary of Labour Party (LP) and a constitutional lawyer, Dr. Kayode Ajulo, has berated the manner in which a former governor of Anambra State and presidential candidate of the Labour Party, Mr. Peter Obi, is going about his presidential campaigns.

Ajulo said, “Obi’s manifesto is more of rhetorical analysis than viable plans to solving the myriad of problems or even one of them facing this country at this critical time.”

The rights activist made this statement while reacting to political developments in the country via a telephone interview from London, UK.

“I have listened to Peter Obi at different times since he began his campaigns and I can say that he has not been able to convince discerning Nigerians of his readiness for the job for which he campaigns. All he has been saying are what should be done which, is not alien to every Nigerian, but has failed to advance any plan about his solutions to resolving those issues in concrete terms and how he intends to do them. Obi merely complains which he and his uncritical followers mistake for a manifesto,” Ajulo said.

He further opined that Obi needed to put together a convincing and achievable manifesto rather than making unrealistic references to nations whose diverse beliefs and cultures are totally at variance with Nigeria.

The lawyer also said that Obi’s choice of a running mate may be another albatross on his ambition.

“It would seem that Obi did very little consultations with the northern critical stakeholders in determining the choice of his running mate,” he added.

He said Obi should have allowed inputs from those who are critical to the prevailing situation of the country to influence his choice of a Vice Presidential candidate.

Ajulo said, “Peter Obi’s running mate, Senator Datti Baba-Ahmed is an intelligent and a good man, certainly qualified for the job of even the President but the present situation of the country is not only about looking good on one’s certificates or even in the bank. The challenge that has bred economic hardship in Nigeria even in the midst of our plenty should have been a major point of concern before picking his running mate. To me, that challenge is the state of insecurity in the country which has risen exponentially in the last decade. I honestly believe that that should be the first thing to consider because nothing can properly work amidst insecurity.

“Even as it appears that the Buhari administration is trying to tackle the issue of insecurity in the country, it still requires the coalition of people who understand the dynamics and who can proffer viable solution. I believe that Peter Obi would need the support of northern stakeholders, revered religious clerics and scholars like Ahmad Abubakar Gumi, Rev Fr. Mathew Kukah and notable labour leaders as well as former military leaders if he is really serious about the presidential race.

“Notable stakeholders as the Sheikh, the Reverend Father, seasoned political strategists, and experienced journalists are needed to ensure that Obi Presidency is a reality,” the lawyer further said.

Ajulo also frowned at the strategy deployed by Obi’s supporters in marketing his ambition to the Nigerian people.

He said his years of experience in politics have taught him that mob actions do not translate to genuine support.

“I have been involved in three major elections as a stakeholder in advisory positions at the federal level. I have also gathered enviable experiences as an activist and as a lawyer who has defended election related issues. I know that mob action and evoking raw emotions without pragmatic approach are never veritable strategies to sell a candidate to the electorates,” he said.

He said he wondered who the leading strategist of Peter Obi campaign is, saying Obi’s supporters, especially the online ones, were always in brawls with individuals or groups.

Ajulo said: “bullying fellow contestants or possible voters is not and cannot be a part of political campaign strategies that can win votes”

Ajulo noted that Mr Obi has not taken his time to understudy the manifesto of the Labour Party to be able to draw an efficient campaign strategy.

He said “Let me advice Peter Obi as a former National Secretary of the Labour Party. He needs to study the manifestos of the Labour Party to be able to design a well thought out plan. He should take a cue from the former Governor of Ondo State, Dr. Olusegun Mimiko, who defeated an already established structure of the then incumbent People’s Democratic Party in a keenly contested governorship election within three months of joining the Labour Party”.

Ajulo is also of the view that Obi must be able to convince Nigerians that he is totally in control of at least six States outside of his own Anambra State before he can boast of winning the 2023 elections, and that, he must prove this within the next two months before the members of the electorates start picking permanent sides.

The former LP scribe said his reaction is informed by his love for the sustainable development of the country and wants to assist the electorate to make the best decision in the overall interest of the country.

“My greatest concern is with what the candidate himself can do (rather than his party) as well as the gains for the Nigerian people. Since I voluntarily resigned as the National Secretary of Labour Party, I remain a ranking caucus leader of the Labour/Civil Movements and I am practically involved at the National level to assist political discourse in Nigeria, especially when it has to do with governance and the development of the people. This is part of what informed my support for Prof Yemi Osinbajo’s presidential ambition,” Ajulo concluded.