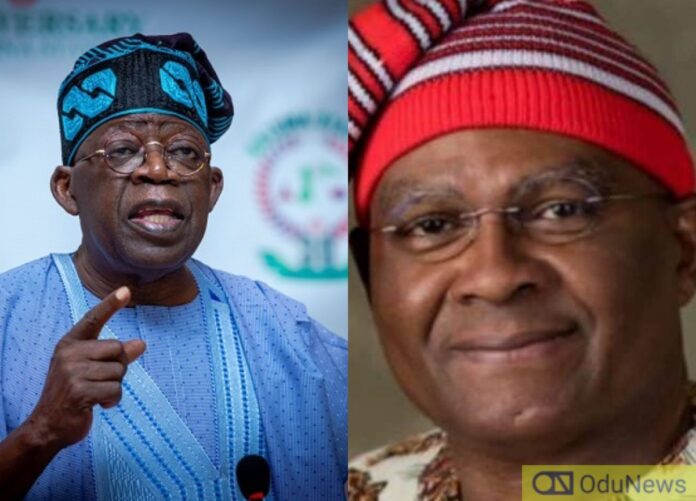 In a statement, Chimaroke Nnamani, a PDP senator, gives a candid assessment of Tinubu era and passed the verdict: Ahmed Bola Tinubu is the MOST successful Governor in modern Nigeria bar none.

In a season, when Tinubu has become the target of ceaseless and virulent attacks by traducers, Chimaroke’s unsolicited offers a breath of fresh air. It is a testimonial like no other, for the APC Presidential candidate, coming from a member of the PDP.

Bola Tinubu, the 12th governor of Lagos State, was a co-governor with me (1999–2007). As colleagues we worked together in pioneering the first meetings of Conferences of Southern Governors which we interchanged hosting the first and second and visited Enugu for the meetings.

That meeting brought to the front burner issues of Federalism both Physical and Fiscal. I still remember the educative contributions of Gov. Bisi Akande.

I must confess of occasional envy as we interchanged ideas and implemented reform decisions. He had more resources and quickly implemented the full requirements of ACCESS to Justice reform project. Making the Lagos State Criminal Justice System, one of the best in Africa

I recall a National Competition on Reform advances amongst States covering Governance, Transparencies, Budgeting and Ease of doing business. Supervised by the Economic Adviser to the President ( a guy from Benue State), DFID and other development partners also participated. Enugu emerged tops, followed closely by either Lagos State or the FCT. Enugu also established the first Poverty Reduction Study, Review, Guidelines and Implementation before the Federal Government or indeed any other State, verified by Dr Joe Abah, former DFID staff in Enugu. Enugu tried considering our Financial dilemma. The Justice system also paid close attention to Women and Children welfare.

He (Tinubu) had an impressive track record as a governor; his state contributed more than 30% to our country’s GDP, accounted for more than 65% of industrial investment in Nigeria, 80% of its international trade, and collected more than 60% of the country’s value-added tax.

Both governments pioneered Development Centers. For obvious political reasons he was denied due Federal allocations for years. He kept ploughing on! His Justice sector also provided jobs to many spouses of non Lagosians working and residing in Lagos. I had cause to engage with him on jobs for Enugu spouses. In the Education Sector he introduced Tutor General and raised the bar for earning by teachers. In Enugu we approved that Primary School Teachers could rise to level 16.

We also approved elevation for those who obtained graduate qualifications. I also admired his pupil Governor for a day. Somehow I never got to it. Tinubu also directly intervened in Enugu spouses who had issues as teachers. In the Health Sector, I faintly recall a Soyinka heading his HIV program and later becoming Health Commissioner! As a doctor I kept tab on his strides in my professional area. With a modern Disease Surveillance system and Emergency Medicine program in place.

He put in programs coordinating health and Justice for abused women and children. Tinubu had first class social work response program. His reform advocacy was second to Enugu State. I had the advantage of background but gravely limited by resources. He left a lasting legacy of hard work in Lagos State in infrastructure (roads and housing).

When Bola Ahmed Tinubu was governor, Lagos state’s IGR rose from 600 million Naira per month to over 8 billion Naira per month. He had an impressive track record as a governor; his state contributed more than 30% to our country’s GDP, accounted for more than 65% of industrial investment in Nigeria, 80% of its international trade, and collected more than 60% of the country’s value-added tax. In the area of Human capacity, his mentorship was first class and his mentees have spread out and like little acorns many have become giant oak trees in Nigeria’s political firmaments.
Just like in Enugu we appointed non Enugu people (avoiding the meaningless and retrogressive anathema “non indigene”) I recall my brother Ben Akabueze being a repository of the financial and economic secrets of “Yoruba” Tinubu Lagos State Government

In the area of Human capacity, his mentorship was first class and his mentees have spread out and like little acorns many have become giant oak trees in Nigeria’s political firmaments.

Fashola, Osinbajo, Aregbesola, Fayemi, etc. All first class with A-game always. I vigorously oppose, protest and detest the shameless campaigns and parody targeting Tinubu’s health. As a Health worker I am amazed by the ignorance, foolishness, wickedness and callousness of these idiotic operators. I believe they are unwarranted, extremely unprofessional, and have no place in our polity. As the GenZ grow and Nigeria merges with the new world, they will cry at the foibles of their progenitors. Get it folks, life is turn by turn limited (apology Uncle Bode). These actions which bleed my heart personally are of public records. History and The Almighty will be very harsh to these bad political comedians. Since we all desire a better Nigeria, our politics should be grounded in facts and reliable evidence. This is the only way we can advance this nation. Ahmed Bola Tinubu is the MOST successful Governor in modern Nigeria bar none. Result of combination of may truisms some beyond him.

I vigorously oppose, protest and detest the shameless campaigns and parody targeting Tinubu’s health. As a Health worker I am amazed by the ignorance, foolishness, wickedness and callousness of these idiotic operators. I believe they are unwarranted, extremely unprofessional, and have no place in our polity

Permit me to mention some past presidents who stood out for being able to contribute to the growth and greatness of their countries despite health issues. The first person on my lineup is:- John F. Kennedy (JFK). JFK actually experienced almost daily discomfort, He had digestive issues, allergies, and a persistent back condition that necessitated several operations and was made worse by his participation in World War II. He had medical sequelae of hypoadrenalism, anemia, low blood pressure, etc essentially later determined to be Addison’s disease. Franklin Delano Roosevelt (FDR) the longest serving president of the United States of America served his term as president on a wheelchair this was as a result of polio diagnosis when he was 39yrs old in 1921.

Despite his health Roosevelt guided the country through the Great Depression and World War II, two of the biggest crises of the 20th century. He significantly increased the federal government’s authority through a number of initiatives and reforms known as the New Deal. He was also a key figure in the successful campaign to eradicate Japanese militarism and German National Socialism. Woodrow Wilson After World War I, Woodrow Wilson founded the League of Nations (1914–18). He oversaw the passage of laws outlawing child labor and the 19th Amendment, granting women the right to vote. Wilson’s mouth was sagging on one end in 1919, a sign of a partial stroke, according to a doctor, by October 1919, he was partially paralyzed.

Dwight D. Eisenhower, elected in 1952, American remembered his era as the “happy days” one which they enjoyed nothing but a booming economy. It is important to note that he was already suffering from abdominal adhesions resulting from a 1923 appendectomy and in 1956 during his second term He was diagnosed for having Crohn’s disease, a severe digestive condition that called for surgery. Eisenhower has a stroke shortly after that in 1957. Americans were able to enjoy a booming economy regardless of his health. Ronald Reagan Even though there isn’t much proof that the 40th president had Alzheimer’s while he served as commander in chief, suspicions of dementia followed Reagan during his first presidential campaign, where the 69-year-age old’s attracted a lot of attention as he was the oldest incoming president. Regardless, being referred to as “the great communicator” By negotiating effectively with Congress, Reagan was able to pass legislation that boosted employment, reduced inflation, and strengthened the nation’s defense. H.E . Bola Tinubu needs to work on improving relationships with many others especially my people the Igbo. He needs to lead by advocacy, example, practice and open mindedness in assuaging the feeling and ongoing hostility to the Igbo in Lagos.

I also condemn the castigation of Igbo by my highly distinguished colleague HE Oluremi Tinubu, done under whatever circumstances. The Igbo can not apologize for exploring the limits of achieving the Trinity of her character. Igbambo (hustle) Njepu( Travel) and Ako na Uche( cot of reason).
The accomplishments (Ntoozu) and summation of the parts is irrevocable. The celebration of the Trinity and crescendo, ODENIGBO draws jealousy and hostility from those who claim to own Lagos. Guess what, the Igbo is not going anyway. Rather in the spirit of their fathers and fore fathers more are pouring into Lagos every day. Tinubu is qualified to run for president of Nigeria in 2023 as there is no evidence that he has dementia. While my vote is covered by the Umbrella per my Party PDP and our Candidate, HE Atiku Abubakar. I take a bow for the hardest working Politico of this generation. He patiently paid his due.

I pray he recovers from his alleged ailments as many humans do. May God and posterity visit Ahmed Bola Tinubu with Mercy, Peace and kindness.