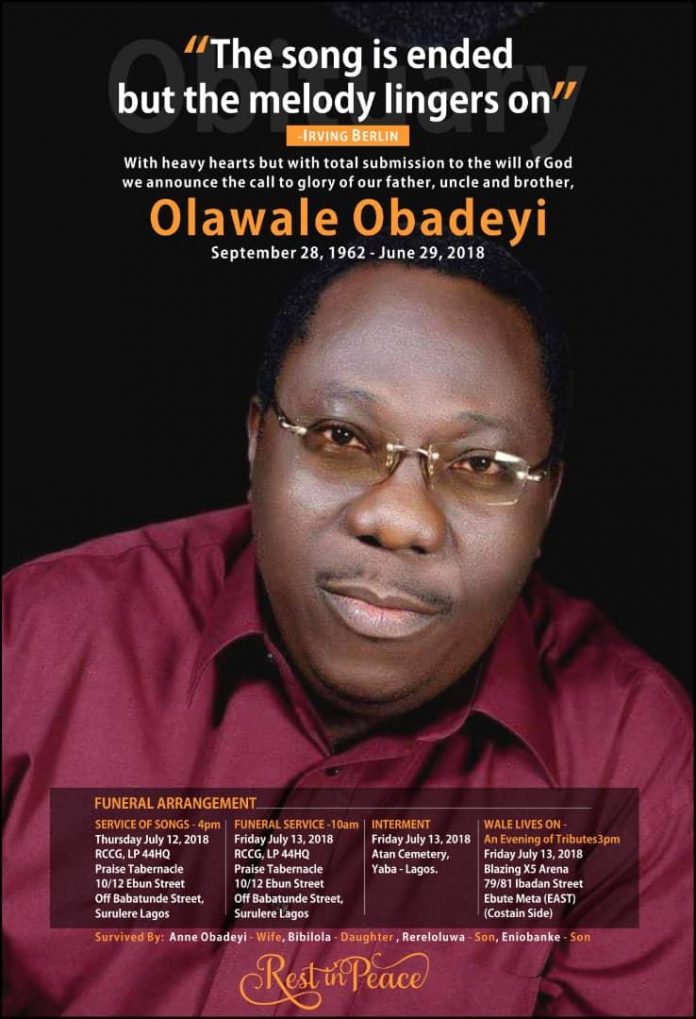 The death has been announced of renowned writer, wordsmith, public relations and advertising guru, Olawale Babajide Obadeyi (Wally Jay) at the age of 56. He passed away on Saturday, June 30, 2018 after a very brief illness.

The Igbore, Abeokuta, Ogun state born man of many parts, attended African Church Grammar School, Abeokuta for his O levels before proceeding to Baptist Academy, Obanikoro, Lagos for his A levels. In 1992, Obadeyi graduated with a Bachelor of Arts in English Studies, majoring in Literature, from the prestigious Obafemi Awolowo University, Ile Ife after first obtaining a diploma in Dramatic Arts at the same institution.

Married to Tonia and blessed with adorable children, Obadeyi is also an acclaimed master of ceremony, an actor’s actor, a vibrant communicator and talented scriptwriter, having written for many stage, television and radio programmes including Mosun’s diary and The Loya Milk Show as well as the about to be published book “TONGUES OF THE FORECOURT” on Yoruba music, folklore and witticism.

Burial arrangements would begin with a lying-in-state at the RCCG, Praise Tabernacle 10/12 Ebun street off Babatunde street, Surulere on thursday, July 12, 2018 at 4pm. Funeral would take place the next day at the same venue, by 10am while internment would take place at Atan Cemetery, Tabs to be followed by an evening of tributes tagged Wally Jay Lives On at Blazing X5, Arena, 79/81, Ibadan street by Osholake street, Ebutemetta East from 3pm.