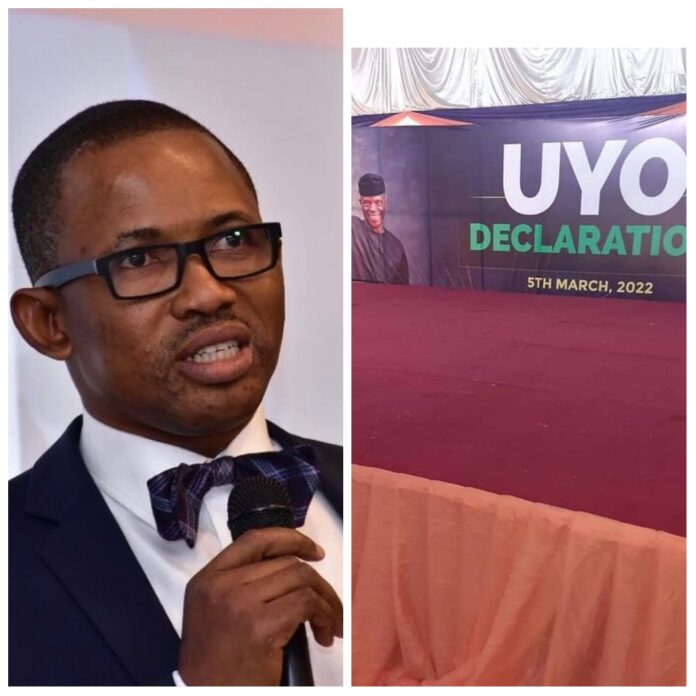 I present my full and warmest compliments to you all.

▪Since the creation of Akwa Ibom from Cross River State on September 23, 1987 by the then Military Administration of General Ibrahim Badamosi Babangida, Uyo is the Capital and administrative headquarters of the State, the State has made a significant contribution to Nigerian politics.

▪The State has produced emiable personalities who have served in government both at the regional and National level. E.g H. E. Victor Attah, Senator Eta Enang, Gov. Akpabio etc

▪Economically, Akwa Ibom State is based around the production of crude oil and natural gas as highest oil-producing state in the country.

▪The State with about 31 Local Government Area stands out in the South -South Region of the Country. Hence, the State is a strategic and situable location for the mobilization of grassroots supporters in the South South for the realisation of a better Nigeria through Prof.  Yemi Osinbajo.

▪Though Prof. Yemi Osinbajo has not formally declared his intention to run for the presidency at the 2023 general election one cannot but emphasis that the Nigerian Constitution and ethos of politics permit us to canvass vote for anyone who in our belief qualifies for the position in question.

▪After a careful analysis of the leading potential Presidential Candidates in the coming election, it is an undeniable fact that Prof Yemi Osinbajo has no doubt established a strong base upon which we can consolidate for the future and his political ideology has stood the test of time. Prof Yemi Osinbajo has more intellectual endowment, superior pedigree and moral heft than other potential contestants.

In his work Twelfth Night, infamous playwright, and wordsmith, William Shakespeare tells us not to fear greatness: “Some are born great, some achieve greatness, and some have greatness thrust upon ’em.” The quote, often misattributed to former President Teddy Roosevelt

Prof. Yemi Osibajo ticks the three above boxes, he was born into greatness, he has a good pedigree, he’s the late sage’s son, and a scion of a world-acclaimed family. The Prof also achieved greatness, as an academic, I know what it is to be a Professor of Law of an ivy institution, as a lawyer, I know what it takes to rise within the ranks and be elevated to the enviable and prestigious rank of the Senior Advocate of Nigeria.

Professor Osinbajo also has greatness thrust upon him, he was appointed an SA to the Attorney General of the Federation made great marks that his Principal was elevated to be an Honourable Justice of the World Court in Hague, Prof Osinbajo was appointed as Attorney General of Lagos State, for 8 years, it was unprecedented ground breaking achievements in the governance  of Lagos State.

Greatness was also thrust upon him when President Buhari picked him as his Vice Presidential candidate and together they got the Nigerian’s mandates.

▪Of more significance is the fact that since Nigeria experienced democracy in 1979, Prof. Yemi Osinbajo has been acclaimed as the most engaged and loyal Vice President.

▪For the benefit of hindsight, the vice presidents that have so far served under democratically elected presidents since 1979 were: Alex Ekwueme, under President Shehu Shagari; Atiku Abubakar, under President Olusegun Obasanjo, and Goodluck Jonathan, under Umaru Yar’ Adua. Namadi Sambo, served under Goodluck Jonathan, and Yemi Osinbajo, the 5th democratically elected Vice President, is  currently serving under President Muhammadu Buhari. By most accounts, from 1979 until date, no other vice president seemed to have had a more genial working relationship with his principal than  Osinbajo.

▪One must also add that since he started Prof. Yemi Osinbajo is not just born/destined for leadership and greatness. He has been groomed, cultured and nurtured for greatness. Of more significance is the fact that he never lobbied to be chosen as the Vice President to President Muhamadu Buhari.

Today, when you talk of loyality, trust, competence, capability faithfulness and ability, Prof. Yemi Osibajo comes to mind in taking Nigeria to the next level as the President, Commander-in-Chief of the Armed Forces of the Federal Republic of Nigeria.

Distinguished compatriots, ladies and gentlemen that is why we are here.

*Dr Ajulo is the Convener, Progressive Lawyers for Osinbajo.