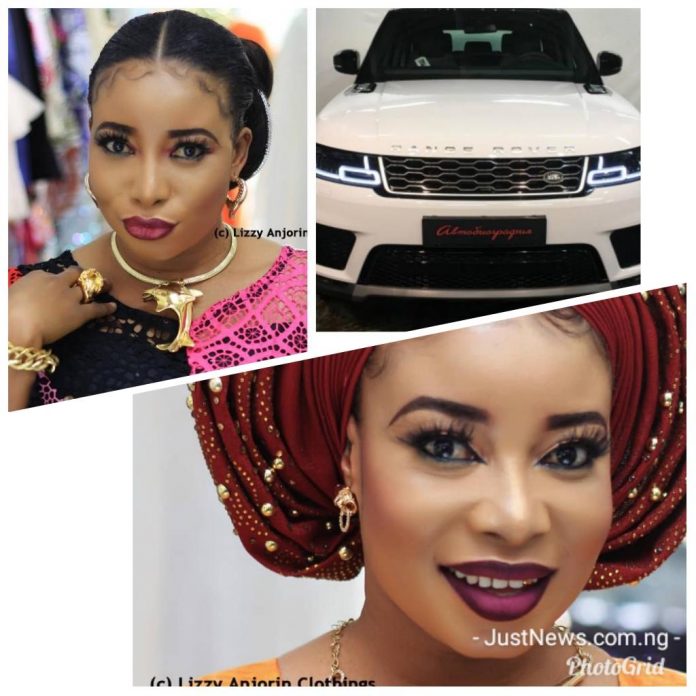 Nollywood actress, Liz Anjorin stunned many some months back when she held a movie premiere that has remained memorable. While the king of World Beat, King Sunny Ade spiced up the event with music, revered Alaafin of Oyo kingdom, Oba Lamidi Adeyemi added a big one to the event when he donated the sum of five million naira to support the project. Alaafin’s gesture became talk of the town and the beneficiary of the gesture, Liz earned more respect among her colleagues as well as got her social rating elevated.

The beautiful slim built light skinned actress is in the news again. She just took delivery of a Range Rover Autobiography, and the graduate of Olabisi Onabanjo University has been over the moon following her new acquisition. Announcing the good news on her social media, the actress attributed the wonder on whell that cost about sixty million naira to kind gesture of who she called her sugar daddy.   ‘ I have to thank my Sugar Daddy once again, obviously for the health, for the talent, for blessing and upgrading me from Range Rover Evoque to latest Range Rover Autobiography, because without Him, I can never achieve this’. She continued, Oya, lets expose our sugar daddy’s name jooor…mine is HIGHEST CHIEF ASEGAN DOGO. She wrote.