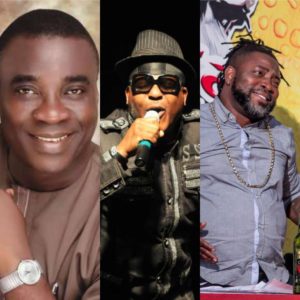 This is part of the ongoing Ariya Repete initiative, an expanded music talent hunt for Fuji and Juju artistes organised by Goldberg, from the stables of Nigerian Breweries Plc.

The veteran artistes will make presentations on fundamentals relating to appearance, composure, creativity, vocalisation, stage craft as well as other aspects of Fuji and Juju music.

It will be an opportunity for the participants to enhance their skills as they prepare for the quarterfinals on July 7, 2017 in Akure; the semi-finals on July 14 in Abeokuta and the grand finale on July 21 in Ibadan, where the cash prize of N1 million would be won in each category as well as a recording deal each.

KWAM1, a renowned Fuji artiste, released his first solo album Abode Mecca in 1979 and his most successful album Talazo 84 in 1984. He is known for introducing the sounds of keyboards, saxophones and guitars into Fuji music genre.

Sir Shina Peters, a frontline Juju musician, is well known for his Afro-Beat and intense Fuji-style percussion. He came to limelight in 1989 with his electrifying debut album Afro-Juju Series 1, and has received numerous recognitions for his unparalleled prowess in the art of writing, composition, choreography and musical ability.

Also, Temidayo Babatope Joseph, whose stage name is Puffy Tee, is a renowned music producer who has been in the industry for 21 years. He is the producer behind hit songs like Eleko by Davido‘s new act Mayorkun; Yahooze by Olu Maintain; Lorile by X-Project; Away by VIP; Aiye by 9ice and many more.

Commenting on the performance of artistes during the auditions, the Portfolio Manager, Mainstream Lager and Stout Brands, Nigerian Breweries Plc, Emmanuel Agu said he was delighted at the abundance of musical talent in the southwest region and “through Ariya Repete there is the tendency that more can be discovered and nurtured.”

He stated that Ariya Repete Academy is an opportunity to learn new techniques applicable to both music genres from renowned musicians, for the competition and future endeavors.