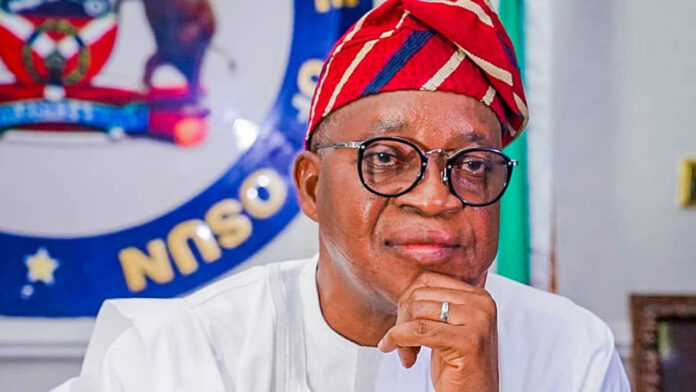 The Osogbo Action Committee has been advised not to incite the people against Governor Adegboyega Oyetola by spreading falsehood that the government intends to dethrone the Ataoja of Osogbo, Oba Jimoh Olanipekun Oyetunji.

The Chief Press Secretary to Governor Oyetola, Ismail Omipidan, said in a statement that the letter to the governor asking him to stay action on a non-existent process is not only mischievous but also a wicked one deliberately designed to pitch the people against the governor and his government by agents of the Peoples Democratic Party, PDP, masquerading as community leaders.

“The author of the letter, Chief Ajadi Badmus, has unfettered access to Mr. Governor. If indeed he has the best of intentions, he ought to have found out from the governor before making his spurious claims.

“Recall that Chief Badmus had also authored a similar letter shortly before the July 16 governorship election wherein he claimed that the government had relocated the Airforce Base from Osogbo to Iragbiji. The wicked lie became the major weapon the PDP agents deployed to canvass for votes in Osogbo and its environs.

“To this end, I appeal to leaders of thought and clerics in Osogbo to endeavor to find out the truth , know the truth and act based on the truth.

“I also urge the people to disregard the content of this fallacious letter as it does not fit the gentleman’s personality of a governor Osun people and the nation know too well,”
Omipidan said.