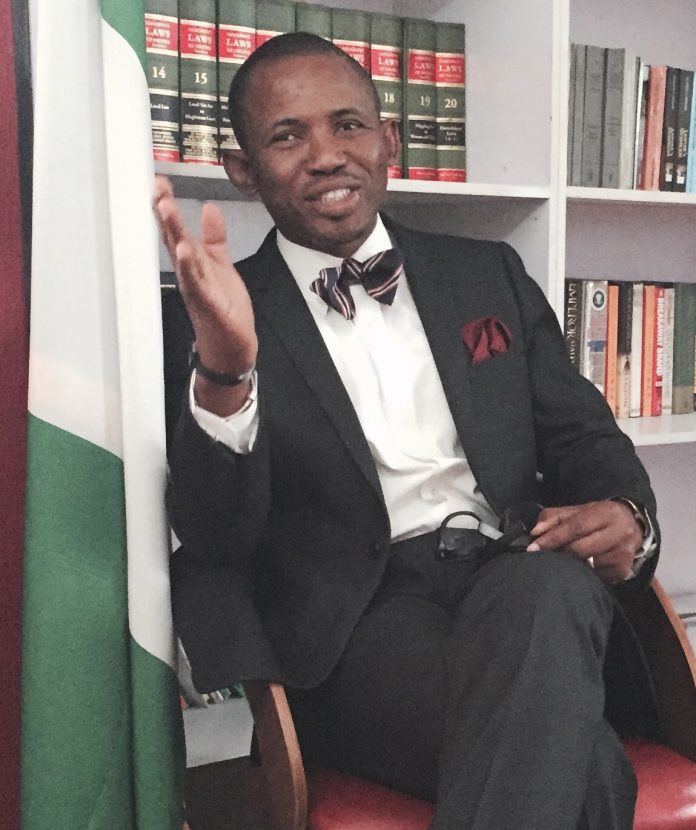 The June 12 Election of 1993 is an historic day in the history of Nigeria, with the conduct of the first free and fair election in Nigeria, in which unfortunately, MKO Abiola who won the Election never became President because the results of the Elections were annulled by the then military ruler, General Ibrahim Babaginda.
With President Muhammadu Buhari declaring June 12 as Democracy day to honour MKO Abiola, though a welcome idea is a new twist in Nigeria history signifying that the President acknowledges the importance of what happened on 12th June, 1993.

We should not get ahead of ourselves, else Nigeria will pull up a flippant front internationally, as the country will be seen as a confused one that does not have a firm grasp of its own laws to the extent that it can’t obey it. This move by the President is commendable and with all the accolades being showered on him, we must remind ourselves that Nigeria is a Constitutional State bound by laws.

I should therefore look into the laws to see if the conferment of GCFR and GCON on the dead is legal.  Section 2 and 3 of the Honours Warrant, a subsidiary legislation of the National Act 1964 deals with “eligibility for appointment to orders” it states;

2.  Eligibility for appointment to Orders
(I) Subject to paragraph (2) of this article, a person shall not be eligible for appointment to any rank of an Order unless he is a citizen of Nigeria.
(2) A person other than a citizen of Nigeria shall be eligible for appointment as the   honorary holder of any rank of an Order; and appointments made in pursuance of this paragraph shall be disregarded for the purposes of paragraph (3) of the foregoing article.
3.  Mode of appointment to Orders, etc.
(I) The President shall by notice in the Federal Gazette signify his intention of appointing a person to a particular rank of an Order.
(2) Subject to the next following paragraph of this article, a person shall be appointed to a particular rank of an Order when he receives from the President in person, at an investiture held for the purpose-
(a)   the insignia appropriate for that rank; and
(b)   an instrument under the hand of the President and the public seal of the Federation declaring him to be appointed to that rank.
(3) If in the case of any person it appears to the President expedient to dispense with the requirements of paragraph (2) of this article, he may direct that that person shall be appointed to the rank in question in such a manner as may be specified in the direction.

This is the position of the law. Section 3(2) of the Honours Warrant specifically states that the person to be appointed to a particular rank of an Order has to receive from the President in person at an investiture held for the purpose; the insignia appropriate for that rank and an instrument under the hand of the President and the public seal of the Federation declaring him to be appointed to that rank.

But the Nigerian National Honours Act which state that orders must be received in person is granted a waiver under S.3(3) of the same act which state that:
(3) If in the case of any person it appears to the President expedient to dispense with the requirements of paragraph (2) of this article, he may direct that that person shall be appointed to the rank in question in such a manner as may be specified in the direction.

Even though, the narrative of the June 12 Election is quite significant and should be remembered, there are some things to note.
1.    The GCFR (Grand Commander of the Order of the Federal Republic) is the first in the order of importance of the Nigerian National Honours instituted by the National Honours Act of 1964 to honour Nigerians who have rendered service to the benefit of the Nation.

2.    MKO Abiola though won the Presidential Election but was never sworn in so he was never President, and neither was his running mate Alhaji Babagana Kinigibe Vice-President. So customarily, he couldn’t have been bestowed this kind of honour. But still according to the Act, he would be eligible for that honour according to Section 3(3) of the Honour’s Warrant, and since it’s the President who confers such honour, MKO Abiola and Gani Fawehinmi would be due that honour, because Section 3(3) provides for a waiver at the direction of the President.
Even though the President as a result cannot draw back the hands of history, he can retrospectively confer on MKO a National honour but can’t declare him as the 2nd democratically elected President in Nigeria because he was not sworn-in.  While so many might not support this, it would be enlightening to look into the laws of the land and see if this move by the President is a legal one.

In the UK, the honour system recognizes people who have made achievements in public life, committed themselves to serving and helping Britain. They usually have made life better for other people or be exceptional at what they do. They must still be actively involved in what they’re being nominated for.

The only honour which can be awarded after someone’s death are bravery awards given to those who have saved or attempt to save someone’s life. This is the only award in the UK conferred posthumously. And whether someone gets an honour and the honour they get is decided by an honours committee.

The Medal of Honor which is the United States of America’s highest and most prestigious personal military decoration is awarded to recognize U.S. military service members who have distinguished themselves by acts. It could also be awarded posthumously.

Therefore, since S.3 (3) of the Honours Warrant states that the procedure under S.3 (2) may be dispensed only by the president where it becomes expedient i.e honoring MKO Abiola posthumous is dispensing with him having to collect his award in person under S.3 (2) because its expedient for the president to do so under S.3 (3) by reason of his death.

In respect of this, it could be said that the act of the President to award late MKO Abiola and late Chief Gani Fawehinmi is a laudable feat set to celebrate their struggles for the Nation. And just like the National Anthem rightly puts; that the “labour of our heroes past shall never be in vain.” This the President has achieved.