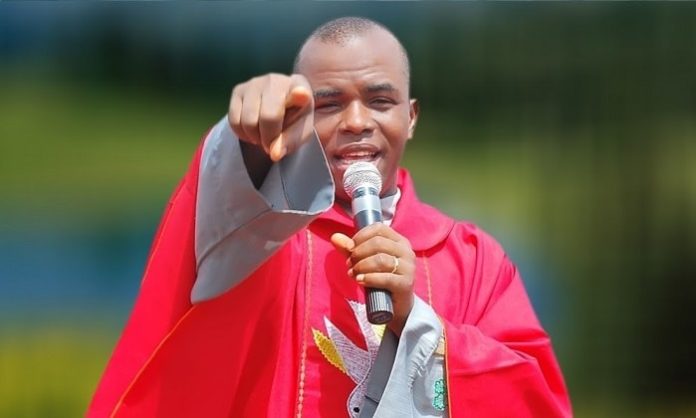 The Catholic Diocese of Enugu has lifted a ban on church members from attending services at the Adoration Ministry, three months after.
The Catholic Bishop of the diocese, Callistus Onaga had, on 18 June, banned church members from attending activities at the ministry.
The ban followed scathing remarks Ginat Labour Party presidential candidate, Peter Obi, by an outspoken Catholic priest, Ejike Mbaka, who is the spiritual director of the ministry.
Mr Mbaka, during his weekly ministration service in June, said Mr Obi would not be president of Nigeria in 2023 because he is a stingy man..
He also said unless Mr Obi returned to his Adoration Ministry to apologise for refusing to make a donation to the ministry when he was asked to do so, his ambition to become president of Nigeria would be fruitless.
Many Nigerians, including the diocese, criticised him over his comment on Mr Obi.
The cleric later apologised to the former governor and his supporters, saying that his intent was not to malign the LP candidate.
The ministry has remained shut since the ban, despite protests by Mr Mbaka’s followers.
But the diocese, Thursday, confirmed that the ban on the ministry has been lifted.
The Director of Communication of the diocese, Benjamin Achi, told PREMIUM TIMES that Mr Onaga, the Catholic bishop, approved the lifting of the ban.
“The ban has been lifted. They will be starting (activities) on Sunday,” said Mr Achi, a Catholic priest.
Asked if Mr Mbaka was given a new order to prevent him from making further remarks, the spokesperson said such has not yet been issued by the diocese.
“If there will be any, it will come later,” he said.
Mr Mbaka announced the resumption of religious activities at the ministry in a post via the ministry’s official Facebook page, on Thursday.
“Dear Adorers, to the glory of God, Adoration Ministry, Enugu Nigeria, starts on Sunday, 2nd October 2022 with 10 a.m. mass at the adoration ground, Umuchigbo, Iji Nike- Emene, Enugu State,” he said.