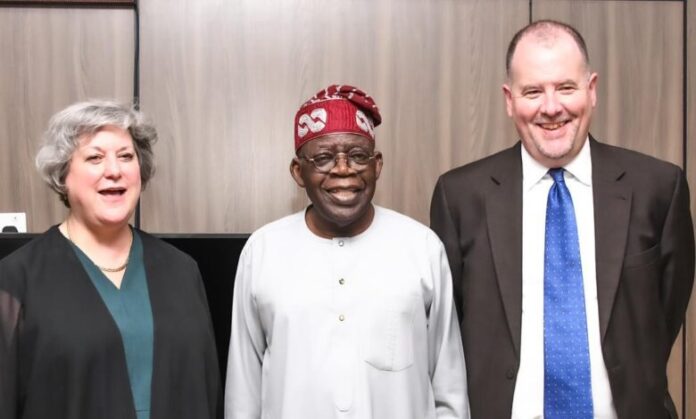 Contrary to the claims in the trending fake news published by an online news platform, All Progressives Congress (APC) presidential candidate, Asiwaju Bola Ahmed Tinubu, did not apply for United States visa recently and was not denied visa.

The online platform, Nigerianconcord.com.ng that published the fake story in a follow-up story doubled down by insisting on the authenticity of their report in a statement by its Publisher/Editor-in-chief, Abiodun Oluwarotimi, where he challenged Tinubu to prove he was not denied US visa.

WesternPost investigation has, however, revealed that Tinubu currently has no need to apply for a US visa at present, anytime this year or indeed for the next one year because his US visa is still valid.

The APC presidential candidate renewed his US visa last year 2021 and was issued a two-year visa, the maximum period of validity any Nigerian can get.

WesternPost can also reveal that the current visa was issued on November 18, 2021 and will expire November 15, 2023.

Perhaps, apparently miffed by the fake and groundless report, the US Ambassador to Nigeria, Mary Beth Leonard, who last week visited Tinubu at the APC Presidential Campaign Office in Abuja, cracked a joke with the APC standard-bearer, saying “so the two-year visa you received last November has suddenly expired.”

Ambassador Leonard was accompanied on the visit by U.S. Political Counselor, Rolf Olson.

It should be noted that the APC presidential candidate has been a subject of opposition attacks and sometimes mischievous fake news even before and after he emerged as the flagbearer of his party.

Speaking on the fake US visa denial story, Mr. Tunde Rahman, the Media Advisor to Asíwájú Tinubu, described it as “original fake news, deserving no response.”

He said: “Oga, it’s an original fake news. HE Asíwájú was not and has never been denied US visa. He has a two-year valid visa that was renewed last November. Two years is the maximum any Nigerian can get.

“It’s a ridiculous post by a non-existent news online. You know one can’t really be taking issues with a non-existent platform. The fake story was attributed to Nigerian Concord newspaper. The Concord as you know closed shop many years ago! ”

On the challenge by the Publisher of Nigerian Concord that Tinubu’s team should issue a statement to deny his story if they are sure he was not denied US Visa, Mr. Rahman responded thus:

“We don’t have time for a rabble-rouser seeking to drive traffic to a fabricated and unknown website.”