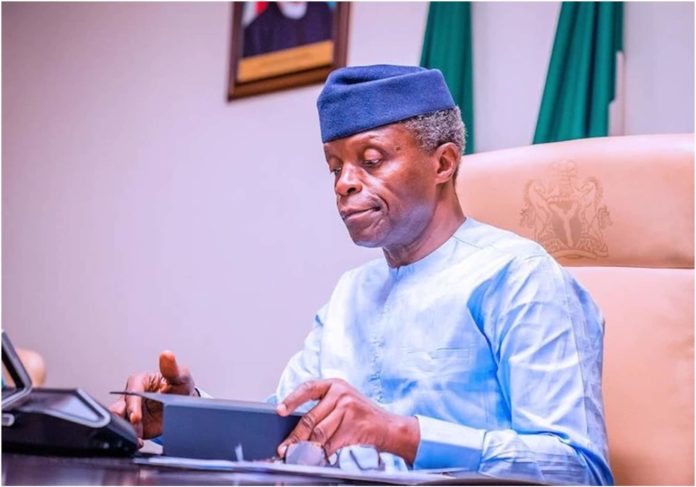 As Nigerians at home and in Diasporal as well as the entire world eagerly await Prof Yemi Osinbajo’s acceptance speech to run for the office of the President and the C-in-C, Armed Forces of the Federal Republic of Nigeria in exercise of his right of first refusal as the Vice President of Nigeria, a little bit of reflection of the person and personality of Prof. Yemi Osinbajo is in order given our present circumstance.

After a careful analysis of the leading potential Presidential candidates in the forthcoming 2023 Presidential Election, It is imperative to know that in the present political calculation and permutations, there is no other Nigerian, old or young who comes fully prepared like Prof. Yemi Osinbajo.

It is an undeniable fact that Prof. Yemi Osinbajo has no doubt established a strong base upon which we can consolidate for the future and his political ideology has stood the test of time. Prof. Yemi Osinbajo has more intellectual endowment, superior pedigree and moral heft than other potential contestants, however, these attributes are not the focal point of this discussion, but his experience that stands him out as a man for this moment and a man of greatness far above other contestants.

William Shakespeare, the wordsmith, tells us not to be weary of greatness: he said this; “Some are born great, some achieve greatness, and some have greatness thrust upon ’em.”

Prof. Yemi Osinbajo ticks the three above boxes of Williams Shakespeare , he was born into greatness, he has a good pedigree, he’s an in-law to the late sage, Chief Obafemi Awolowo and a scion of a world-acclaimed family. The Prof. also achieved greatness, as an academic, I know what it is to be a Professor of Law of an Ivy institution. As a lawyer, I know what it takes to rise within the ranks and be elevated to the enviable and prestigious rank of the Senior Advocate of Nigeria (SAN).

While most of the aspirants have been peddling what they did in the 90’s Prof. Osinbajo has greatness tossed upon him from the 80’s when he was appointed as SA to Dr. Teslim Olawale Elias for those who may not know, Taslim Olawale Elias, was born on the 11th day of November 1914, the year of our amalgamation and died on the 14th day of August 1991 the year the Federal Capital Territory (FCT) was moved from Lagos to Abuja. Dr. Elias as he was fondly called, was a super jurist. He was Attorney-General and Chief Justice of Nigeria and a judge and President of the International Court of Justice. He was a scholar who modernised and extensively revised the laws of Nigeria and above all he was a devout Muslim. And to this great world-renowned legal luminary, Prof Yemi Osinbajo was his Assistant at the World Court, Hague.

Prince Bolasodun Adesumbo “Bola” Ajibola, was a Knight of the British Empire, he was born on the 22nd day of March 1934, this great jurist was the President of the Nigerian Bar Association (NBA), he was the Attorney General and the Minister of Justice of Nigeria from 1985 to 1991 and a Judge of the International Court of Justice from 1991 to 1994. He was also one of the five commissioners on the Eritrea-Ethiopia Boundary Commission, a devout Muslim, he established an Islamic and co-educational institution, Crescent University, in Nigeria in 2005, and also serves as the Chairman of the Board of Trustees of Muslim Ummah of South West Nigeria (MUSWEN). He was also the High Commissioner of Nigeria to the United Kingdom from 1999 to 2002. And to this great legal juggernaut, Prof. Yemi Osinbajo was his Special Assistant.

Bola Ahmed Adekunle Tinubu, the Jagaban of Borgu, and Asiwaju of Lagos needs no introduction, he is an Accountant, elected as Senator in 1992 for less than a year. In 1999 Asiwaju Tinubu served as the Governor of Lagos State till 2007 and he’s known as the National Leader of the All Progressives Congress (APC) since the party’s formation in 2013.
Again to the Asiwaju of Lagos and Jagaban Borgu, Prof Yemi Osinbajo was his Chief Law Officer and Attorney General of Lagos State Government with unprecedented ground breaking achievements in the governance of Lagos State.

President Muhammadu Buhari is a retired General and has served as military head of state in Nigeria between 1983 to President Muhammadu Buhari ran for President of Nigeria in 2003, 2007, and 2011. In December 2014, he emerged as the presidential candidate of the APC for the 2015 general elections. To assist Buhari, the lot fell on Prof Yemi Osinbajo who ran a joint ticket with President Buhari and won the election, defeating incumbent President Goodluck Ebele Jonathan. This was the first time in the history of Nigeria that an incumbent president lost a general election. Muhammadu Buhari is also a Muslim like Taslim Elias, Prince Bola Ajibola and Asiwaju Bola Tinubu.

Prof Yemi Osinbajo’s contributions to the successes and elevations of the above names are better imagine. Of more significance is the fact that since Nigeria existence and amagamation as a Country, Prof. Yemi Osinbajo has been acclaimed as the most engaged, experience and loyal senior Vice President.

For the benefit of hindsight and by most accounts, no other vice president seemed to have had a crisis-free, corruption-free, more genial working relationship, with his principal than Prof. Osinbajo.

One must also add that since he started, Prof. Yemi Osinbajo is not just born/destined for leadership and greatness. He has been groomed, cultured and nurtured for greatness. Of more significance is the fact that he never lobbied to be chosen as the Vice President to President Muhamadu Buhari.

Today, when you talk of loyalty, trust, competence, capability faithfulness and ability, Prof. Yemi Osinbajo stands out and comes to mind in taking Nigeria to the next level as he has been primed for the role of the President,Commander-in-Chief of the Armed Forces of the Federal Republic of Nigeria