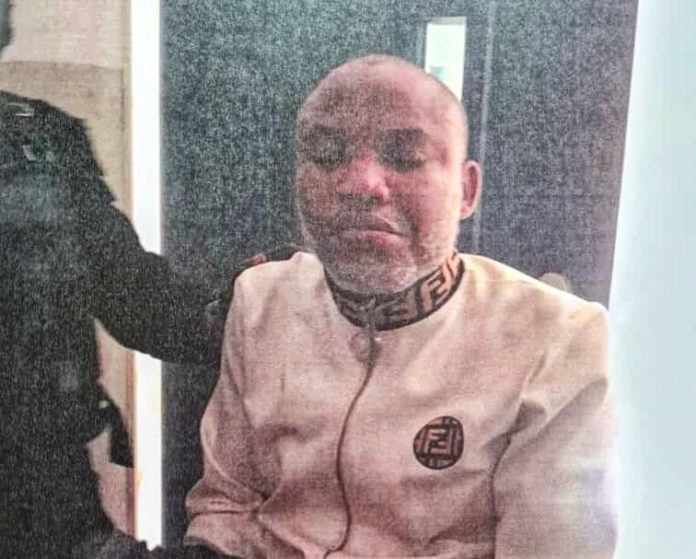 The court of appeal in Abuja has granted a stay of execution on its judgment which discharged Nnamdi Kanu, leader of the Indigenous People of Biafra (IPOB).

The appellate court, in a unanimous decision by a three-member panel led by Haruna Tsanami, granted the application filed by the federal government pending the hearing and determination of an appeal before the supreme court.

Kanu has been in detention since he was brought back from Kenya on June 19, 2021.

The IPOB leader was subsequently re-arraigned on an amended 15-count charge.

On April 8, the judge struck out eight of the 15 counts in the charge. The remaining seven counts were later quashed by the court of appeal on October 13.

Delivering judgement in the appeal, a three-member panel of the appellate court led by Hanatu Sankey held that the federal government flouted the Terrorism Act in violation of international conventions and treaties, hence, breaching the rights of the respondent.

The court further held that having illegally and forcefully renditioned the appellant, the trial court is stripped of jurisdiction to continue to try Kanu.

However, the federal government is yet to release the IPOB leader.

Instead, it filed an appeal before the supreme court to challenge the appeal court judgment.

It also filed an application seeking to stay the execution of the appellate court’s judgment.

Ruling on the application, the court of appeal granted the government’s request

However, the appellate court ordered the federal government to, within seven days, transmit the record of appeal as well as its verdict on the matter to the apex court to enable speedy determination of the case.

He is also asking for N100 billion as damages for the violation of his fundamental human rights.