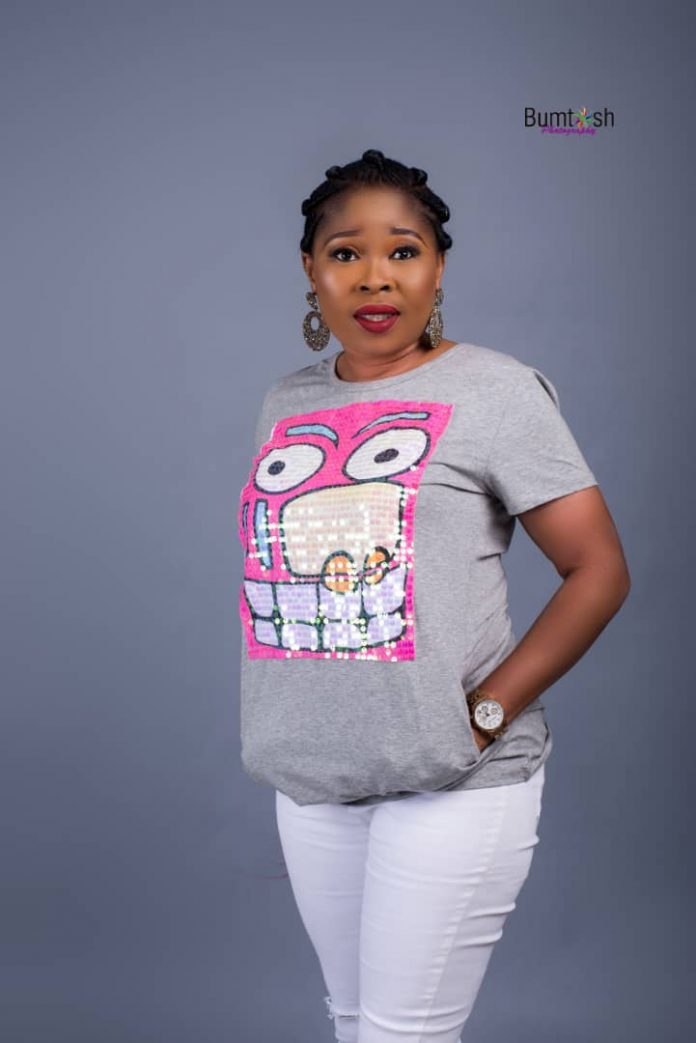 As far as the entertainment industry is concerned, only her detractors would belittle her influence and record of her input. That is because the personality in question, Doyin Aggrey pitched her tent, especially with the movie industry when it was far less attractive and she dispensed so much effort in terms of creativity to the industry that she’s held in high esteem by her fans and colleagues. Doyin is a television presenter and actress of note. .

The light skinned, little framed and beautiful wife and mother, aside being appreciated by her fans, she’s equally very popular among her peers in the industry that she could pull a whole lot  of strings in the industry. Another thing she has going for her is the fact that she has tried her best in ensuring her image is not smeared, hence, she’s proudly among those who are scandal free in the industry.

Talking about how she got involved and how long she’s been in entertainment, the English/Arts graduate of Olabisi Onanbanjo University, Ago-Iwoye, Aggrey, says she has been into entertainment all her life, but actually started the whole thing as a presenter and producer on Yotomi Cable TV.

She says, ‘All my life, I have been into entertainment.  I started with Yotomi Cable TV as a presenter and producer in 2003. Yotomi was owned by late Alade Aromire. I was basically in programs department and I had my own show on television too. Almost at the time, I also got a programme running on LTV 8 while I conceptualized and managed one for HITV…all entertainment programmes. Alade Aromire being an actor, I got exposed to the movies and I started with them as location manager, I would look for places for them to shot movies and manage location affairs. All the while, I never came before the camera but behind the scene. That was how I started getting to know my way around and mingled with different actors and that before I knew it, I had my hand into production; I mean I began producing my own movies.

Prior to her involvement with television, Doyin says she had long been identified as one who loves to talk at home so much that she was jokingly called a talkative. As she grew into adulthood, her friends noticed the same trait and they began to encourage her to try her hands on television presentation but Doyin would not want to hear any of that, because according to her, she was very shy. However, her friends didn’t give up on her as they would force her to act MC for their events before fate eventually paved way for her to be on television through a visit to a friend who was already a presenter. Her words,’ since my childhood, I had loved to talk. There was no way I would see something and not talk about it. In fact, they used to call me a talkative at home. At that time, I knew nothing about entertainment so, there was no way I would have liked or nurture aspiration to entertain. But as I grew older and mingled with others, my friends started encouraging me to go do job that require speaking but I didn’t take them seriously because I was a shy person. But before I knew it, my friends out of the confidence they have in me, they would force me to do MC at events and surprisingly, I would do it very well and they would all say nice words about my performance and all that. That actually encouraged me in a way but I still didn’t see it as what I should dedicate my time and energy to’. She continued. ‘I have a friend, his name is Dapo Oshin. He worked with Yotomi Cable Television back then. In late 2003, he invited me to pay a visit to his office. When I got there I met this girl called Labake, she had a programe and she said she would love to have me on the show to co-host with her and I agreed even though I was naïve kind of. The amazing thing that happened was that, by the time I got on the show, the main presenter was amazed at my performance. I ended up hijacking the show. Uncle Alade Aromire was also amazed that he promised to give me a programe to run and that was how the whole thing started and my interest became stronger that I wanted to be everywhere as far as it was entertainment.

Until some months back that she returned with a bang, Doyin, an amiable and humble personality was off the radar for a period of about five years. Since her return however, she has been so much active even as she has released two blockbusters, Ayalo (Borrowed pose) and Karamotu (Dual personality). With these two new efforts, the numbers of movies to her credit are now four as she had in the past produced Alatoto and Omo Oko. At the moment, she is finalizing arrangements to return to location with other big names in the industry for yet another movie. Also, efforts are at concluding part to see how her packaged entertainment show, Ariya Unlimited debut on Africa Magic, Dstv.

As regards her five year sabbatical off the scene, Doyin says, the time taken off was basically to give required attention to home front among other important things and that there was actually no trouble rocking her marriage as speculated in some quarters during that period.

Explaining, she says, I stopped being active in the industry for about five years because , I felt there was a need to give full attention to my home. My kids were pretty young and as a mother, I felt they needed me more at that time so, contrary to speculations that I had to quit the industry over marriage troubles, I can tell you it is baseless. My husband knew I was into entertainment since we met and till date, I enjoy his support and confidence. While I was away, some of my close friends, Funsho Adeolu and Ope Olusanya updated me regularly with happenings and they were so eager to see me return…they have also been very helpful since I returned. I am so grateful to them.

One other thing that obviously stands Doyin out as an actress, is that she’s been able to hold her marriage together since she signed the dotted line, and in the quest to know the method she has adopted such that her marriage could be said to have stand the test of time, at least in its own way, she replies thus. ‘Firstly, I would give God the glory for his mercies and grace. It’s not that I do anything out of the ordinary that those with broken marriage didn’t do, it is purely grace of God that my marriage is intact. Secondly, I would say I married a man who values his home as much as I do so; this has helped us a lot. Having said that, I think it is right for me to say I have a few practices that I have kept to. One, I love to keep my home as my home. I don’t put my home out there for any reason and two, I try to listen to and read up anything on marriage and I can tell the information I get help me be a better wife.

On her fulfillment and aspirations, she says, in terms of fulfillment, I would not say I am one hundred percent fulfilled because there is much to still cover, but what I can’t deny is that I give glory to God for how far he has taken me. For aspirations, I have a whole lot on my list that I know with hard work and God on my side, I will get them achieved. I look forward to producing a movie that will get international recognition in its real sense and that will impact the entire human race. That is major among my aspirations.