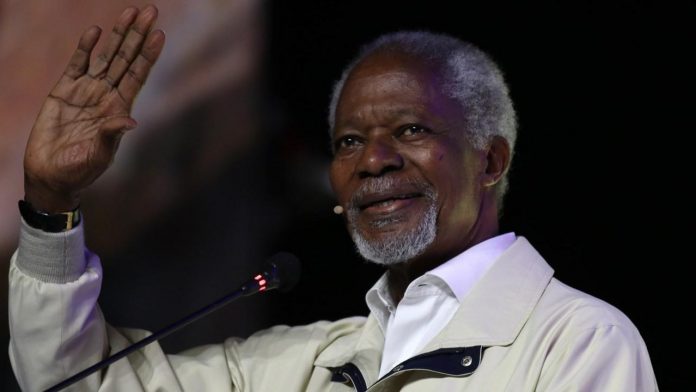 Goodbye to a great man of peace and liberty-Ajulo

With the despairing news of the death of Kofi Annan, one of his quotes which has become my mantra came to mind;

“If one is going to err, one should err on the side of liberty and freedom”

This quote propels me to think of the dignity of the human race and the rights of every man which should never be denied.

Indeed, the world has lost one of its finest diplomats who will be remembered for reshaping and vitalizing the UN, giving priority to Human Rights, fighting for the control of the spread of HIV in Africa and his declared opposition to terrorism.

Being the first African Secretary-General of the United Nations, he has set a pace at the fore front for Africans and we can only hope to keep up and maintain his stance.

Kofi Annan through his foundation, Kofi Annan Foundation has left a legacy which leaves its indelible marks on the shores of history.

I’m sure with the aim of the foundation which is to promote better global governance and strengthen the capacities of people all over the world to achieve a fairer and more peaceful world, his struggles cannot easily be forgotten.

The office of the Secretary General of the United Nations is number one technically skilled expert office in the world; it is the ultimate enviable seat, when Kofi Annan occupied the position, he never compromised on his standards and beliefs, instead he fought for what he believed in, regardless of the oppositions he encountered.

However, it’s regrettable to noticed recently that most people who I can term as opportunists, who once they’ve occupied an office change entirely and compromise all they’ve fought for. This should not be so, we should have a heart for the people, make our stand known and never compromise on our beliefs. These I have learnt from Kofi Annan.

Apart from visual public occasions and conferences where we’ve met, it’s saddening that I never got the chance to have a one on one interaction with this great man before he passed on, but one thing I cherish most is his passion and the premium he placed on democracy and freedom for all. And this is what Nigeria needs to run with and focus on at this point in time with the elections coming up next year.

At this point, though it is saddening, but death is inevitable, I join the family, friends and the whole world at large to say good bye to this great man of peace.

Chairman, Board of Trustees, Egalitarian Mission for Africa.