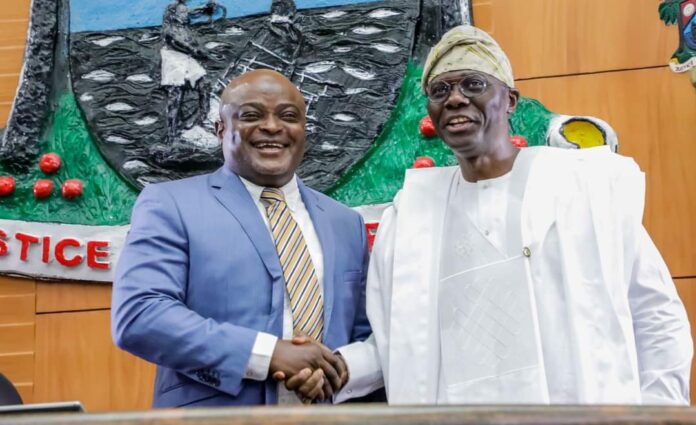 The Speaker of the Lagos State House of Assembly, Rt. Hon. Mudashiru Obasa, on Thursday received the 2023 budget proposal of N1,692,671tn from Governor Babajide Sanwo-Olu stressing that the Bill should address three areas for the benefit of the residents of the State.

The budget is with a capital to recurrent ratio of 55:45 percent.

Dr. Obasa, who noted some of the challenges currently facing Nigeria and its citizens, told Governor Sanwo-Olu: “The Year 2023 budget of Lagos should have more human face, be targeted at reducing poverty and improving the welfare of the residents of the State as part of the THEMES agenda that guides this administration.” 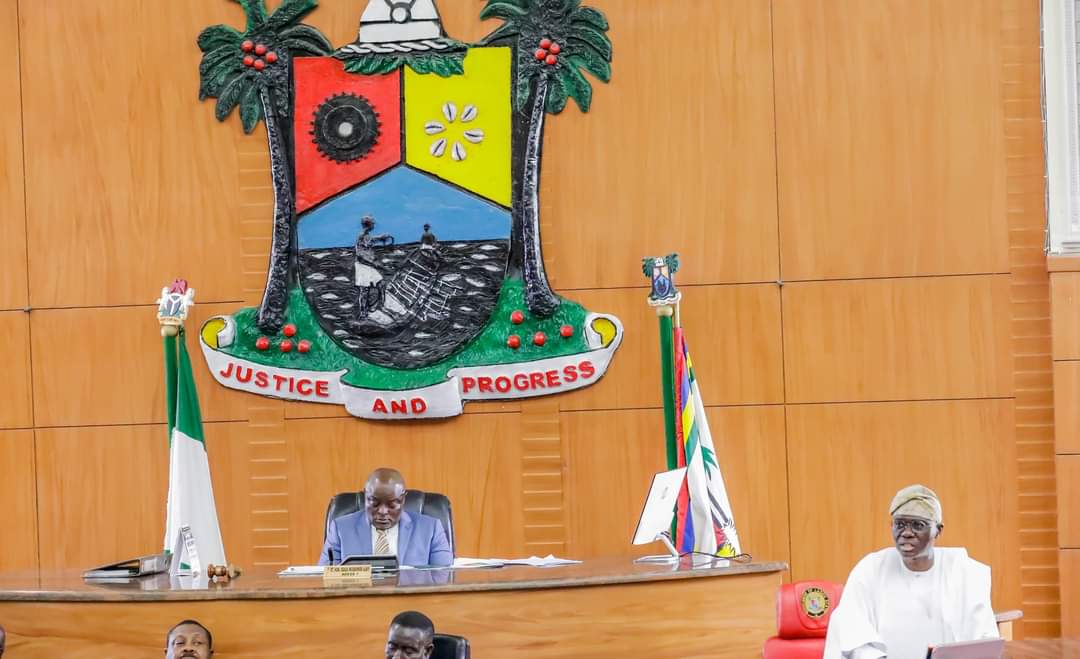 The Speaker said that though the Lagos Government had achieved a lot in its effort to improve the development of the State, it should constantly be conscious that the residents yearn for more dividends of democracy.

Obasa stressed the need for the Federal Government to approve the allocation of one percent special status for Lagos considering its population and the constant influx of people to the State.

Noting that this was the last budget to be presented by the current administration before the 2023 election, Obasa promised that the House would carry out its constitutional duty of scrutinising the proposal for the benefit of the residents of State.

“There is, therefore, no doubt that in the remaining months leading to the end of this administration, so much more needs to be done; so much is still needed from us as the good people of Lagos yearn for more dividends of democracy, especially at this critical time,” he said while promising that the House would continue to support the Executive arm of Government to achieve a better, safer society.

The Speaker also urged Nigerians to vote for the candidates of the All Progressives Congress both at the State and the national levels as he described the Presidential candidate of the party, Asiwaju Bola Tinubu, as one who has the capacity to make Nigeria great again.

1. It is with great joy that I heartily welcome you, on behalf of my colleagues and dedicated staff, to the hallowed chamber of the Lagos State House of Assembly, a legislative arm of government that prides itself as ‘above the common standard of excellence’.

2. Today’s formal presentation of the Year 2023 budget by Mr. Babajide Sanwo-Olu, the very hardworking Governor of Lagos State, signposts another positive chapter in the beautiful history of our State, her progress and development. For this and every other privilege we have had, it will only be wise to give all praise and adoration to the Almighty Allah, the giver and taker of life, the One who reverses the irreversible.

3. Around this time last year, Mr. Governor was here to present the Year 2022 budget themed: BUDGET OF CONSOLIDATION with detailed plans for the current year which is about to end. As we gather here, we have all witnessed the outstanding performance of the budget as regards infrastructural renewal and wealth creation. We can testify that Lagos is truly working.

4. Today, we have come together again to fulfill the requirement stipulated in Section 121 (1) of the 1999 Constitution (as amended) which intendment is to deepen democracy, strengthen democratic institutions and create a society that is not only habitable, but which provides a pride of place for its residents.

5. Dear Lagosians, Mr. Babajide Sanwo-Olu, our Governor, has given us details of how the Government of Lagos intends to utilize the State’s wealth to further boost the development of the State. It is noteworthy that the Year 2023 ‘BUDGET OF CONTINUITY with a size of N1,692.671bn is the last to be presented by this administration as we move towards electioneering and the ushering into existence of a new dispensation next year by the special grace of God.

6. There is, therefore, no doubt that in the remaining months leading to the end of this administration, so much more needs to be done; so much is still needed from us as the good people of Lagos yearn for more dividends of democracy, especially at this critical time.

7. Mr. Governor, permit me to applaud your astuteness, courage, forthrightness and determined spirit for service. The result of true governance geared towards the smart city dream for Lagos reflects in many parts of State. Impressively, Lagos State has continued to thrive with the Government focusing on needed infrastructure including schools, bridges and hospitals. The Imota Rice Mill as well as the Lagos Film City projects are sure to stand our State out in the near future.

8. At our own end, we have passed a number of bills and resolutions that have greatly promoted economic and social development of the state. Our legislative activities have continued to standardise governance and legal procedures, protect peoples’ rights and encourage enterprise and investments in the state, since the last budget presentation by the Governor.

9. Ladies and gentlemen, Lagos, being the Centre of Excellence, is home to millions of Nigerian citizens. Each day, the State experiences an influx of people who come with the hope of having the opportunity to eke out a living. The State has sustained this attraction because it continues to enjoy good leadership. Lagos accounts for about 20% of the national Gross Domestic Product and about 10% of the nation’s population.

10. This is not, however, to gloss over the impact of such massive movement of people to Lagos State. The result is evident in the State’s infrastructures that are consistently overstretched, thus requiring constant attention. This is the reason why we continue to agitate for allocation of one percent special status for Lagos State.

11. Distinguished guests, exercises of this nature have raised our consciousness about economic situations and reactions to events and activities both nationally and globally. All the economic indices at home and abroad indicate that all is not well. These unfavourable variables are due to both human actions and natural occurrences.

12. The world still battles the aftermath of COVID-19 which ravaged the globe without the exception of Nigeria, particularly Lagos, our State. Its effect are still very glaring.

13. Furthermore, the life threatening effects of climate change have become apparent in the rate of flooding experienced across parts of the world leading to the destruction of farmlands and agricultural produce thus causing food shortages and hunger. Nigeria is also currently having its unpalatable share.

14. The effect of the unnecessary war between Russia and Ukraine that has resulted in astronomical surge in the price of energy across Europe and affecting standard of living and employment has also crept into the Nigerian economy. Over here, the impact is seen in the reduced direct remittances from diaspora and in direct foreign investments.

15. Beyond these global challenges, telltale signs of local issues including insecurity in many parts of the country and unemployment are noticeable in Nigeria’s rising inflation rate which has, in turn, caused skyrocketing prices of food and other commodities. The Consumer Price Index (CPI) report released recently by the National Bureau of Statistics (NBS) shows that inflation rose by 20.8% in September, this year. While this most recent figure is up from 20.52% recorded in August, the result is that it further digs into the pockets of the citizens. This affects their purchasing power.

16. While it is the constitutional responsibility of this House of Assembly to do the needful by meticulously working on the budget as presented by Mr. Governor, I want to assure Lagosians that members of this Honourable House will give a thought to the challenges so far highlighted as well as other considerations in the process of shapening the proposal to meet the aspirations of the people.

17. The Year 2023 budget of Lagos should have more human face, be targeted at reducing poverty and improving the welfare of the residents of the State as part of the THEMES agenda that guides this administration.

18. We will also, as usual, continue to give the needed support to you, our dear Governor, as we all match ahead to solidify the achievements gained since 2019 when you took the reins of government.

19. As I begin to round off my remarks, I want to urge you, dear Lagosians, to keep in mind the need to elect only candidates of the ruling All Progressives Congress (APC) in the House of Assembly, Governorship, House of Representatives, Senatorial and Presidential elections. No doubt, Lagos is a ‘Star State’ because it has enjoyed consistency in governance beginning from the administration of Asiwaju Bola Ahmed Tinubu, our National Leader and by the grace of Almighty Allah, President of the country by 2023.

20. I also want to appeal to members of our great party in Lagos, Nigeria and in the diaspora to keep the tempo high by engaging Nigerians with Asiwaju Tinubu’s plan for a better country. Nigeria will be great again. And our collective hope should be on the APC presidential candidate, who understands what Nigeria needs at this time.

21. To all our party leaders, particularly the GAC members, we must continue in our determination and focus to keep Lagos strong and healthy enough for us. I am confident that we will continue to win in every situation and in the coming election.

22. We all know that our National Leader is an easy sell as his footprints of achievements remain indelible in Lagos. Today, our State enjoys an Internally Generated Revenue of N51 billion from the paltry N600 million it earned in 1999. This was the result of the various economic policies initiated by Asiwaju Tinubu while he was Governor. That aside, his education and health policies were the best of the period and are still being referenced till date.